Another light has gone out in the lounge.

Mr. Moore’s sound was based in the joyful boogie-woogie stylings of his mentor Roosevelt “The Honeydripper” Sykes. Mr. Moore died Nov. 27 after a prolonged illness. He was 95. Mr. Moore’s wake will be at 5 p.m. Dec. 6, followed by a funeral at McCullough Funeral Chapel, 851 E. 75th St. Chicago.

The piano entered his life when he was a five-year-old boy on a plantation outside of Greenwood, Miss. Mr. Moore’s mother was a church piano player and piano teacher, although he was not permitted to play blues music inside the house. The devil had something to do with that.

In 1951 Mr. Moore made the trek from Mississippi to Chicago in search of better work opportunities. He met Sykes, who was spot-welding St. Louis ragime with rural blues, creating “boogie-woogie.” The two teamed up playing pianos around Chicago blues clubs.

Like honest and raw versions of Billy Joel and Elton John.

They have all passed away.

“We were considered the lead instrument,” long time Chicago blues piano player “Barrellhouse” Chuck Goering said on Thursday. “We could play by ourselves. Left hand, right hand and sing. Before the electric guitar was amplified we were louder than everybody. We carried the show back in the boogie-woogie craze. The focus of the piano got pushed back in the ‘70s when Otis Spann (1930-70, Muddy Waters piano player) died. The piano was the glue for all those great records. You kick the piano out of those records, they were a good records but the piano made them great records. Now it seems like the piano has been taken out of the mix.”
Otis+Spann-3

Mr. Moore worked a straight job for 36 years for the City of Chicago, beginning as a garbage truck driver and retiring in 1985 as a supervisor in the Department of Streets and Sanitation. He moved to Milwaukee in the early 1990s to be with his daughters.

He returned to Chicago in 1996 to record his big-voiced debut CD “Hello World” for Delmark Records. His second Delmark CD, “Boot ‘Em Up” was released in 1999 and featured James Wheeler on guitar, Bob Stoger on bass and former Muddy sideman Willie “Big Eyes” Smith on drums. Mr. Moore wrote all the material for his Delmark records. He also recorded “Home Brew” on Delmark with juke joint guitarist Brewer Phillips of Hound Dog Taylor and the House Rockers.

“He had a real Delta-Mississippi sound,” Goering said. “He was a great singer and a beautiful guy.”

Mr. Moore was married to Katy Banks, a Greenwood, Mississippi woman he met in Chicago in 1983. In 2008 Mr. Moore and his wife were held up at gunpoint in their south Englewood home.

“My grandson ran out the door,” his widow said Thursday. “I went to close it and apparently someone was standing outside. I closed the door and this guy had come in and put the gun on me and pushed me into the staircase and put the gun on me and my grand daughter. Aaron was upstairs in his music room. I hollered real loud and Aaron came down halfway through the stairs. That’s when he put the gun on Aaron. Aaron gave him $800. Then Aaron started having chest pains. I said, ‘How in the world can you come in a senior citizen’s home when my husband is having a heart attack?’ That’s when one of the guys backed off and the other guy ran out. That was the first time Aaron had been sick.

Unfortunately for the scumbags, Mrs. Moore’s daughter is a Chicago police officer and police quickly came to the home. Mrs. Moore said the robbers were caught after holding up other neighborhood seniors. “One of the guys lived right down the street,” she said. “How can this happen to senior citizens? I went with Aaron to festivals all over the country. He was kind of shy so I went with him to the gigs. Blues artists told me he didn’t play as well when I wasn’t around. 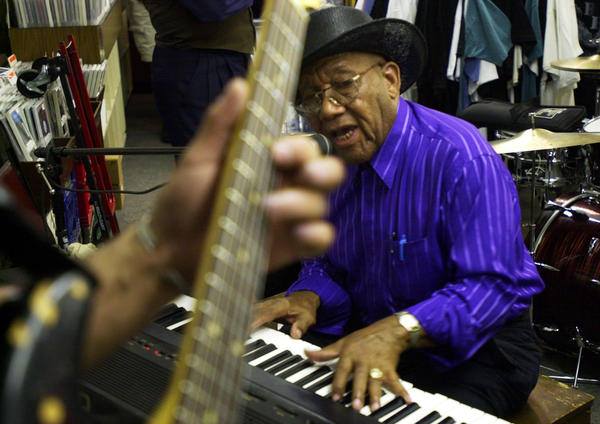