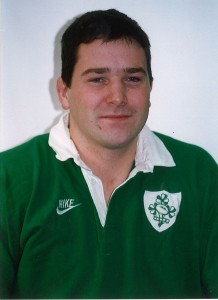 Anthony Foley (30 October 1973 – 16 October 2016) was an Irish rugby union player and head coach of Munster. He was attached to the same squad during his professional playing career. He was a member of the Munster team that won the 2002–03 Celtic League and was the winning captain during their 2005–06 Heineken Cupsuccess. Foley played for Ireland from 1995 to 2005, and captained the squad three separate occasions.

Foley made his professional debut for Munster against Swansea in November 1995, a game that was also Munster’s first ever Heineken Cup fixture.[1] He was in the Munster team that lost 8–9 to Northampton Saints in the 2000 Heineken Cup Final,[2] and was again the runner-up when Munster lost 15–9 to Leicester Tigers in the2002 Heineken Cup Final.[3] Foley was finally on the winning side when Munster won the 2002–03 Celtic League.[4]

When Mick Galwey resigned as Munster captain, Foley narrowly lost to Jim Williams in a vote to decide the next captain.[5] When Williams left Munster in 2005, Foley became the new captain, and in his first season in the position, he led Munster to victory over Biarritz Olympique in the 2006 Heineken Cup Final.[6] Foley had played in all but one of Munster’s first 78 Heineken Cup games until a shoulder injury sustained during Munster’s 21–19 victory over Leicester Tigers at Welford Road in their first game of the 2006–07 Heineken Cup caused him to miss his sides subsequent victory over Bourgoin, as well as back-to-back games against Cardiff in December 2006.[7]

He stood down as captain at the beginning of the 2007–08 season, making way for Paul O’Connell. He was dropped for Munster’s final fixtures of the 2007–08 Heineken Cup, and announced his retirement for the end of the season.[8][9]

Foley made his debut for Ireland against England in the 1995 Five Nations Championship on 21 January 1995. He scored a try on his debut.[10] He went to the 1995 Rugby World Cup in South Africa, an played in one pool game against Japan.[11] He missed the 1999 Rugby World Cup, but was selected for the 2003 Rugby World Cup, featuring in two of the pool games[12] against Romania and Australia.

Foley captained Ireland three times: in 2001 against Samoa, and in 2002 against Romania and Georgia. His last international was against Wales in the 2005 Six Nations.[13]

In March 2011, it was announced that Foley would take over as Munster forwards coach at the end of the 2011 season.[14] He temporarily replaced Gert Smal as Ireland’s forwards coach during the 2012 Six Nations Championship, after Smal was forced to miss the remainder of the tournament with an eye condition.[15][16] Foley signed a contract extension with Munster in May 2013.[17] The following year it was announced that Foley would succeed Rob Penney as Munster’s head coach, signing a two-year contract that began on 1 July 2014.[18]

Foley died suddenly on 16 October 2016, while in Paris with Munster. Munster were preparing to face Racing 92 in their opening game of the 2016–17 European Rugby Champions Cup. The match was subsequently postponed as a result of Foley’s death.[21] He was survived by his wife and three children.[22]