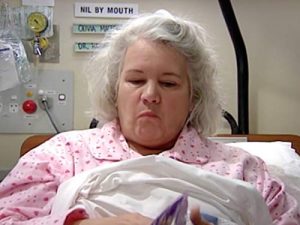 Betty Ann Bobbitt (7 February 1939 – 30 November 2020) was an American actress, director, singer, and playwright based in Australia, with a career that spanned over 60 years emcompassing theatre, television and film.

She was best known for her small screen role as lesbian motherly character Judy Bryant in cult series Prisoner (also known in the UK and US as Prisoner: Cell Block H and Canada as Caged Women) from 1980 and 1985, through 430 episodes, she was the second actress to portray a lesbian character in the series after Carol Burns, who played original character Franky Doyle. Bobbitt was the series second-longest serving actor after original Elspeth Ballantyne, who played Officer Meg Jackson (later Morris), who featured in the entire 692 series run.

Early career in the United States and Australia[edit]

Bobbitt was born in Manhattan, New York, and grew up in Norristown, a suburb of Philadelphia.[2] She attended a Catholic school and Norristown High School.

Moving at aged 18 to Los Angeles for a production of Auntie Mame, she was approached by an Australian television producer who asked her if she “wanted to come to Australia and be funny”.[2] She was contracted for six months and appeared as a regular on a Melbourne television variety show, Daly at Night, as “a female Victor Borge, singing off-key and just plain acting like a dumb brunette”.[2] She was known in Australia in the early 1960s as “Betty Bobbitt from Big Bear”, referencing a fictitious place ostensibly in Pennsylvania.[3]

She subsequently married an Australian artist, Robin Hill,[3] and had a son, Christopher, in England. Returning to Melbourne, Australia, she appeared in many theatre productions with the Melbourne Theatre Company.

Bobbitt was a fixture on Australian television from the mid-1960s with guest roles in serials including Matlock Police, Homicide, A Country Practice, The Flying Doctors, All Saints, Marshall Law, and  Blue Heelers.

She became best known for her portrayal of lesbian character Judy Bryant, a series regular on the popular Australian television program Prisoner. She first appeared in the series in February 1980. After it started to gain a cult status in the US, billed as Prisoner: Cell Block H, an American actress was suggested by producers as a nod to local audiences. Her character was intended only for a short-term 13 episode appearance, but she became immensely popular, and was retained in the series. Bobbitt continued in the role until May 1985, making her the show’s second-longest serving actor, at 429 episodes, second only to Elspeth Ballantyne as officer Meg Jackson Morris, an original who appeared at the series’ inception. After Prisoner, she continued in theatre roles and made guest appearance in television and film

During her time in Prisoner Bobbitt performed with fellow Prisoner cast members Jane Clifton and Colette Mann in a three-woman troupe named “The Mini Busettes” in the 1980s. They performed around Australia in RSL and similar clubs.

Bobbitt appeared in a guest role in TV series Neighbours in 2019, to celebrate the 40th Anniversary of Prisoner, she featured alongside fellow stars Jane Clifton, Jentah Sobott and Jenny Lovell, who arrive in Erinsborough to attend Sheila’s Bookclub, in doing so she was reunited with other Prisoner co-stars who now star in the series, Colette Mann, who plays regular Sheila Canning and Jackie Woodburne who has long played Susan Kennedy.

She appeared in the Melbourne Theatre Company‘s production of Cruel & Tender by Martin Crimp.

She was the sole performer in a production of The Human Voice by Jean Cocteau under the aegis of Tributary, a Melbourne Theatre Company offshoot.[4]

Other television and film[edit]

In 2004, Bobbitt made a brief uncredited appearance in the American television remake of the Stephen King classic, Salem’s Lot, and in 2010 in a thriller, Torn.[citation needed]

In 2011, Bobbitt self-published her book From the Outside (ISBN 9780646561332), which documents her life and career playing the role of Judy Bryant on Prisoner.