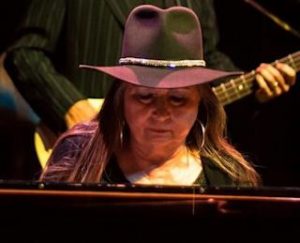 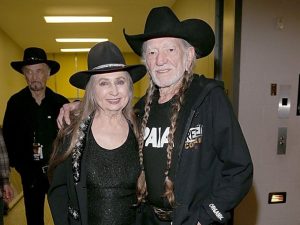 Bobbie Lee Nelson (January 1, 1931 – March 10, 2022) was an American pianist and singer, the older sister of Willie Nelson and a member of his band, Willie Nelson and Family. Her grandmother taught her to play keyboards at age five with a pump organ, and after successful appearances at gospel conventions held in Hillsboro, Texas, her grandfather bought her a piano.

She started singing in school acts and in church with her brother. At age sixteen she married Bud Fletcher, who formed his own band, The Texans. She joined on the piano, while her brother joined on vocals and guitar. The band was disassembled in 1955 after she divorced Fletcher. In 1961, after suffering a breakdown caused by Fletcher’s death and the custody of their children being given to his parents, she moved to Fort Worth, Texas, where she worked for the Hammond Organ Company. After recovering her children, she moved to Austin, Texas.

In 1965 she moved to Nashville, Tennessee, after her third marriage failed. She played in restaurants and different venues until she was called by her brother from New York in 1973 for a session. She joined Willie Nelson on the piano during his sessions with Atlantic Records, that produced The Troublemaker, Shotgun Willie and Phases and Stages. The same year she joined The Family full-time and began touring with her brother.

Bobbie Nelson was born in Abbott, Texas, on January 1, 1931 to Ira Doyle Nelson and Myrle Marie (née Greenhaw).[1] Her mother moved to Portland, Oregon, soon after her brother Willie was born in 1933 (Willie later relocated their mother when he reached adulthood).[2] Her father remarried and also moved away, leaving them to be raised by their paternal grandparents. The Nelsons, who taught singing back in Arkansas, started their grandchildren in music.[3][4]

Her grandmother started instructing her to play piano on a pump organ at the age of five. Her grandfather took her to singing gospel conventions that were held on the courthouse in Hillsboro, Texas, where she performed for the first time—in front of about a thousand people. Impressed by her potential talent, her grandfather bought her a piano for $35 when she was six.[5] Three years later, she started playing with Willie and singing with her grandmother around the house. She began playing in functions at Abbott High School and in church with her brother. When she was fourteen, she began traveling with evangelists around Austin and throughout Texas.[5] 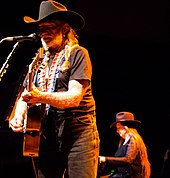 (L-R) Willie and Bobbie Nelson performing in concert in 2012

At age sixteen Nelson met Bud Fletcher and they married. Although Fletcher did not have musical abilities, he formed his own band, Bud Fletcher and the Texans, limiting his participation to directing it.[6] She joined on the piano, while her brother sang and played guitar.[6] The band was disassembled in 1955 when she divorced Bud Fletcher, who was sick. She lost custody of her sons Randy, Michael, and Freddy for playing in honky-tonks and custody was given to her ex-husband’s parents. When Fletcher died in a car accident in 1961, Nelson suffered a breakdown and was admitted to a hospital in Fort Worth. To retrieve custody of their children, she married again and started working in a television repair shop in town. The owner of the store rented a piano to comfort her as she recovered. She began working for the Hammond organ Company, demonstrating and selling their products. She retrieved the custody of her sons and moved to Austin, Texas. In 1965, after her third marriage failed, she visited Nashville, where her brother was working in his music career. She played in different restaurants and other venues until her brother called her from New York in 1973, where he was recording with Atlantic Records. She joined Willie on piano for the recordings, which eventually included the albums The Troublemaker, Shotgun Willie and Phases and Stages. She joined Willie Nelson’s newly formed band, The Family, full-time and started touring with him. In 2008, she released her solo debut album, Audiobiography.[5] In 2017, she was inducted into the Texas Country Music Hall of Fame. Two days after induction she was (again) in concert with her brother Willie Nelson at The Greek Theater in Berkeley, California. Willie always refers to her as “little sister” even though she is the older of the two.