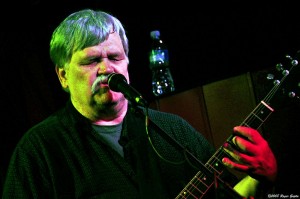 Bruce Hampton (born Gustav Valentine Berglund III, April 30, 1947 – May 2, 2017) was a surrealist American musician.[1] In the late 1960s he was a founding member of Atlanta, Georgia‘s avant-garde Hampton Grease Band.[2] Adopting the moniker Colonel Hampton B. Coles, Retired or alternatively Col. Bruce Hampton Ret., and sometimes playing a sort of dwarf guitar called a “chazoid”,[3][4] he later formed several other bands. Some of those band names include The Late Bronze Age, The Aquarium Rescue Unit, The Fiji Mariners, The Codetalkers, The Quark Alliance, Pharaoh Gummitt, and Madrid Express.[5][6]

As a member of the Hampton Grease Band, Bruce Hampton helped record the 1971 album Music to Eat. The legend states this was the second-worst-selling album in Columbia Records history with the worst being a yoga record.[7][8]

Hampton was the voice of Warren, a talking potted shrubbery, in a 1998 episode (entitled “Warren”) of the TV show Space Ghost Coast to Coast.[12] Hampton played Morris, the songwriting band manager, in Billy Bob Thornton‘s 1996 film Sling Blade. He also starred in Mike Gordon‘s 2001 film Outside Out teaching guitar ‘out’struction.[13]

Grammy Award nominated blues singer and longtime friend Susan Tedeschi wrote a song about Bruce called “Hampmotized.” It appears on her 2002 release Wait For Me. Hampton returned the favor with the song “Susan T”.

“Basically Frightened: The Musical Madness of Col. Bruce Hampton, Ret.” is a documentary about Hampton. It premiered at the Atlanta Film Festival in March 2012.[14]

Georgia Governor Nathan Deal presented Hampton with the Governor’s Award In The Arts and Humanities in 2012.[15]

On May 1, 2017, Hampton was being honored with a concert featuring his friends at the Fox Theatre in Atlanta, Georgia for his 70th birthday when he collapsed on-stage during an encore performance of “Turn on Your Lovelight.” Onlookers and his fellow musicians initially either did not notice that Hampton had collapsed or believed it to be a ruse. As a result, Hampton lay slumped over an amplifier on the edge of the stage for several moments before he was taken offstage for medical attention,[18] he died shortly thereafter at Crawford Long Hospital.[19]

Hampton at the Riverbend Festival in 2007