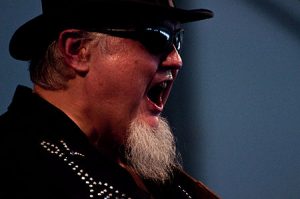 Bryan Lee (born March 16, 1943, Two Rivers, Wisconsin)[1] is an American blues guitarist and singer based in New Orleans, Louisiana. He is also known by the nickname braille blues daddy and has been a fixture on Bourbon Street since the 1980s.

Lee completely lost his eyesight by the age of eight. His avid interest in early rock and blues was fostered through the 1950s by late night listening sessions via the Nashville-based radio station WLAC-AM, where he first encountered the sounds of Elmore James, Albert King and Albert Collins.

By his late teens, Lee was playing rhythm guitar in a regional band called The Glaciers that covered Elvis Presley, Little Richard and Chuck Berry material. Through the 1960s, Lee’s interest turned to Chicago blues and he soon found himself immersed in that scene, opening for some of his boyhood heroes. In 1979 he released his first album named Beauty Isn’t Always Visual.

In January 1982, Lee moved to New Orleans, eventually landing a steady gig at the Old Absinthe House on Bourbon Street becoming a favorite of tourists in the city’s French Quarter. For the next 14 years, Lee and his Jump Street Five played five nights a week at that popular bar, developing a huge following and a solid reputation.

Today Lee continues to perform in New Orleans. He also tours several times a year in the Midwest, Eastern Seaboard, Rocky Mountain States and recently Europe and Brazil. Lee appeared with Kenny Wayne Shepherd as the musical guest on The Tonight Show with Jay Leno on February 14, 2007.