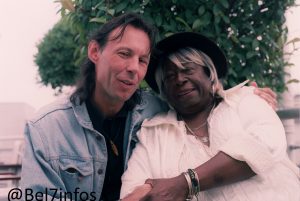 rest in peace my friends our interview together

Carol Fran (October 23, 1933 – September 1, 2021)[2] was an American soul blues singer, pianist, and songwriter, best known for her string of single releases in the 1950s and 1960s, and her later musical association with her husband, Clarence Hollimon. She released five solo albums since 1992, her final collaboration with Hollimon being on JSP Records.[2]

Henry Gray and guest Carol Fran playing at the Festival International in Lafayette, Louisiana on April 24, 2010

Carol Anthony was born in Lafayette, Louisiana, United States.[1][2] Commencing her jump blues singing career with Don Conway, she subsequently relocated to New Orleans. There she married a saxophone player, Bob Francois, which allowed a simple abbreviation to arrive at her stage name of Carol Fran. Establishing a musical presence around Bourbon Street, New Orleans, Fran also undertook a tour of Mexico. Her debut single was “Emmitt Lee”, recorded in 1957 and released by Excello Records. Three more singles ensued, but lack of success saw Fran singing with Guitar Slim, and after his death in 1959, she then sang alongside Nappy Brown, Lee Dorsey, and Joe Tex.[2]

Lyric Records then offered a recording contract to Fran. Her next offerings were a swamp pop version of “The Great Pretender” (1962) and a cover version of “Crying in the Chapel” (1964). Despite a subsequent reissue of the latter on Josie Records, her momentum was stalled by Elvis Presley‘s release of his own version. Her follow-up, “You Can’t Stop Me,” was enhanced by an arrangement by Sammy Lowe, whilst the Bobby Darin penned “A World Without You”, also failed to find sufficient buyers. After another effort, “Any Day Love Walks In,” she returned to the concert circuit.[2]

In 1967 she signed to Roulette Records and issued a version of Brook Benton‘s “So Close.” Success still eluded her and many recordings remained unreleased. Downhearted she concentrated on performing in clubs back in Louisiana. In 1982, Fran met the session guitarist Clarence Hollimon, and they went on to marry a year later and relocated to Texas. After appearing together in concert, Black Top Records released their 1992 album Soul Sensation.[2] Elsewhere, in 1993, Fran contributed to Guitar Shorty‘s album, Topsy Turvy.[3] In 1996, Fran and Hollimon appeared at the Long Beach Blues Festival.

See There! (1994) was her next album release, before another collaboration with Hollimon saw the issue of It’s About Time (2000).[2] However, Hollimon died the same year, and Fran moved back to Lafayette, releasing Fran-tastic in October 2001.[4]

Fran is a recipient of the 2013 National Heritage Fellowship awarded by the National Endowment for the Arts, which is the highest honor in the folk and traditional arts in the United States.[6]