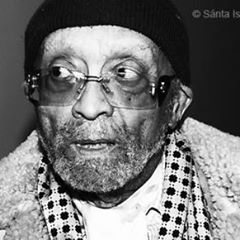 Cecil Percival Taylor (March 25, 1929-April 5, 2018) was an American pianist and poet.[1][2] Classically trained, Taylor was generally acknowledged as one of the pioneers of free jazz. His music is characterized by an extremely energetic, physical approach, producing complex improvised sounds, frequently involving tone clusters and intricate polyrhythms. His piano technique has been likened to percussion, for example described as “eighty-eight tuned drums” (referring to the number of keys on a standard piano).[3] He has also been described as “like Art Tatum with contemporary-classical leanings”.[4]

Taylor was raised in the Corona, Queens neighborhood of New York City.[5] As an only child to a middle-class family, Taylor’s mother encouraged him to play music at an early age. He began playing piano at age six and went on to study at the New York College of Music and New England Conservatory. At the New England Conservatory, Taylor majored in composition and arranging. During his time there, he also became familiar with contemporary European art music. Bartok and Stockhausen have notably influenced his music.[6]

In 1955, Taylor moved from Boston to New York City. He formed a quartet with soprano saxophonist, Steve Lacy, the bassist Buell Neidlinger, and drummer Dennis Charles.[6]

Taylor’s first recording, Jazz Advance, featured Lacy and was released in 1956. It is described by Cook and Morton in the Penguin Guide to Jazz: “While there are still many nods to conventional post-bop form in this set, it already points to the freedoms which the pianist would later immerse himself in.” Taylor’s Quartet featuring Lacy also appeared at the 1957 Newport Jazz Festival. He collaborated with saxophonist John Coltrane in 1958 (Stereo Drive, currently available as Coltrane Time).

Throughout the 1950s and 1960s, Taylor’s music grew more complex and moved away from existing jazz styles. Gigs were often hard to come by, and club owners found Taylor’s approach to performance (long pieces) unhelpful in conducting business.[7] His 1959 LP Looking Ahead!, showcased his innovation as a creator in comparison to the jazz mainstream. Unlike others at the time, Taylor utilized virtuosic techniques and made swift stylistic shifts from phrase to phrase. These qualities, among others, still remain notable distinctions of Taylor’s music today.[8]

Landmark recordings, like Unit Structures (1966), also appeared. With ‘the Unit’, musicians developed often volcanic new forms of conversational interplay. In the early 1960s, an uncredited Albert Ayler worked for a time with Taylor, jamming and appearing on at least one recording, Four, unreleased until 2004.

Taylor began to perform solo concerts in the second half of the sixties. The first known recorded solo performance (by Dutch radio) was ‘Carmen With Rings’ (59 min.) in De Doelen concert hall in Rotterdam on July 1, 1967. Two days before Taylor had played the same composition in the Amsterdam Concertgebouw. Many of the later concerts were released on album and include Indent (1973), side one of Spring of Two Blue-J’s (1973),[10] Silent Tongues (1974), Garden (1982), For Olim (1987), Erzulie Maketh Scent (1989) and The Tree of Life (1998). He began to garner critical, if not popular, acclaim, playing for Jimmy Carter on the White House Lawn, lecturing as an in-residence artist at universities, and eventually being awarded a Guggenheim Fellowship in 1973 and then a MacArthur Fellowship in 1991.

Following Lyons’s death in 1986 Taylor formed the Feel Trio in the early 1990s with William Parker (bass) and Tony Oxley (drums); the group can be heard on Celebrated Blazons, Looking (The Feel Trio) and the 10-CD set 2 T’s for a Lovely T. Compared to his prior small groups with Jimmy Lyons, the Feel Trio had a more abstract approach, tethered less to jazz tradition and more aligned with the ethos of European free improvisation. He has also performed with larger ensembles and big-band projects. His extended residence in Berlin in 1988 was extensively documented by the German label FMP, resulting in a massive boxed set of performances in duet and trio with a who’s who of European free improvisors, including Oxley, Derek Bailey, Evan Parker, Han Bennink, Tristan Honsinger, Louis Moholo, Paul Lovens, and others. Most of his latter day recordings have been put out on European labels, with the exception of Momentum Space (a meeting with Dewey Redman and Elvin Jones) on Verve/Gitanes. The classical label Bridge released his 1998 Library of Congress performance Algonquin, a duet with violinist Mat Maneri. Taylor continued to perform for capacity audiences around the world with live concerts, usually played on his favored instrument, a Bösendorfer piano that features nine extra lower-register keys. A documentary entitled All the Notes, was released on DVD in 2006 by director Chris Felver. Taylor was also featured in an earlier documentary film Imagine the Sound(1981), in which he discusses and performs his music, poetry and dance.

Taylor recorded sparingly in the 2000s, but continued to perform with his own ensembles (the Cecil Taylor Ensemble and the Cecil Taylor Big Band) as well as with other musicians such as Joe Locke, Max Roach, and the poet Amiri Baraka.[11] In 2004, the Cecil Taylor Big Band at the Iridium 2005 was nominated a best performance of 2004 by All About Jazz,[12] and the same in 2009 for the Cecil Taylor Trio at the Highline Ballroom in 2009.[13] The trio consisted of Taylor, Albey Balgochian, and Jackson Krall. An autobiography, more concerts, and other projects are in the works.[14] In 2010, Triple Point Records released a deluxe limited edition double LP titled Ailanthus/Altissima: Bilateral Dimensions of Two Root Songs, a set of duos with long-time collaborator Tony Oxley that was recorded live at the Village Vanguard in New York City.

In 2013, he was awarded the Kyoto Prize for Music. In 2014, his career and 85th birthday were honored at the Painted Bride Art Center in Philadelphia with the tribute concert event “Celebrating Cecil”.[15] In 2016 he received a retrospective at the Whitney Museum of American Art entitled Open Plan: Cecil Taylor.[16]

Taylor, along with dancer Min Tanaka was the subject of Amiel Courtin-Wilson‘s 2016 documentary film “The Silent Eye”.[17]

In addition to piano, Taylor has always been interested in ballet and dance. His mother, who died while he was still young, was a dancer and also played the piano and violin. Taylor once said: “I try to imitate on the piano the leaps in space a dancer makes”. He collaborated with dancer Dianne McIntyre in 1977 and 1979. In 1979 he also composed and played the music for a twelve-minute ballet “Tetra Stomp: Eatin’ Rain in Space”, featuring Mikhail Baryshnikov and Heather Watts.

Taylor is a poet, citing Robert Duncan, Charles Olson and Amiri Baraka as major influences.[18] He often integrates his poems into his musical performances, and they frequently appear in the liner notes of his albums. The CD Chinampas, released by Leo Records in 1987, is a recording of Taylor reciting several of his poems, accompanying himself on percussion.

According to Steven Block, free jazz originated with the performances of Cecil Taylor at the Five Spot Cafe in 1957 and Ornette Coleman in 1959.[19] In 1964, Taylor co-founded the Jazz Composers Guild to enhance the working possibilities of avant-garde jazz musicians.[20]

Taylor’s style and methods have been described as ‘constructivist‘.[21] Despite Scott Yanow‘s warning regarding Taylor’s “forbidding music”:

he goes on to praise Taylor’s “remarkable technique and endurance,” and his “advanced”, “radical”, “original”, and uncompromising “musical vision.”[2]

This vision is one of Taylor’s greatest influences upon others:

Playing with Taylor I began to be liberated from thinking about chords. I’d been imitating John Coltrane unsuccessfully and because of that I was really chord conscious.

In 1982, jazz critic Stanley Crouch outed Taylor as being gay, prompting an angry response.[22] However, Taylor never denied it.[23] In 1991, Taylor told a New York Times reporter “[s]omeone once asked me if I was gay. I said, ‘Do you think a three-letter word defines the complexity of my humanity?’ I avoid the trap of easy definition.”[24]