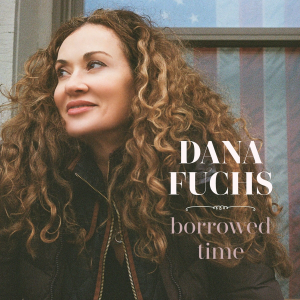 Dana Fuchs (pronounced Fyooks, born January 10, 1976) is an American singer and songwriter known for a mix of Southern rock, soul, roots, and blues. She is also an actor. The New York Times‘ Stephen Holden called Fuchs’ performance in the film Across the Universe, “triumphal”.[1]

The youngest of six children,[2] Fuchs was born in New Jersey and raised in the small rural town of Wildwood, Florida. When she was twelve, she sang in the First Baptist Gospel Choir.[3] Her father was an alcoholic and her grandfather died by suicide, which was the start of a series of family tragedies. In her teens she performed in drama class and in a guitar group. She began using illegal drugs, dropped out of school, left home, and worked as a stripper. After moving to New York City, she took a job as a legal secretary before returning to stripping. She entered psychotherapy and group meetings to begin to deal with her struggles. Soon after, her sister, an alcoholic and drug addict, died by suicide[4] and her oldest brother died from brain cancer.[5][6]

Her experience with death and loss became a theme in her music.[7]

In 1998, Fuchs began to concentrate on singing and songwriting[4] influenced by her love for Esther Phillips[7] and Etta James.[2] She performed in blues clubs, and after meeting Jon Diamond, they formed the Dana Fuchs Band and released the album Lonely for a Lifetime (2003). Her raspy voice invited comparisons to rock singer Janis Joplin, and she acted as the singer in Love, Janis, an Off-Broadway musical about Joplin that ran from 2001 to 2003.[8] When director Julie Taymor wanted to make a movie about someone with a voice similar to Joplin’s, she hired Fuchs for Across the Universe (2007).[1][2] The movie was nominated for Best Picture at the Golden Globe Awards.[3]

With Jack Livesey, Fuchs wrote and performed songs on the soundtrack for the Big Beach production of Laurie Collyer’s independent film Sherrybaby, including the opening and closing title songs.[10] She also worked for MTV during the 1990s and 2000s as the voice of many of its on-air promos.[8]

After fulfilling her contractual obligation with Ruf Records, Fuchs started her own label called Get Along Records.[11] With a successful crowd funding campaign on PledgeMusic, she financed the recording and released her May 2018 album, Love Lives On on the label.[12][13] The album was recorded in Memphis and produced by Kevin Houston[14] with songs co-written with guitarist and band member Diamond.[3]

Fuchs is an ambassador for The JED Foundation (JED), an organization that tries to prevent suicide and help teens with their emotional health.[15]