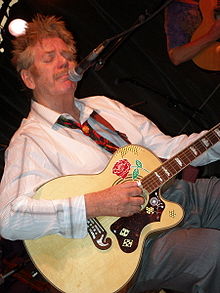 Daniel Ivan Hicks (December 9, 1941 – February 6, 2016) was an American singer-songwriter who combined cowboy folk, jazz, country, swing, bluegrass, pop, andgypsy music in his sound. He led Dan Hicks and His Hot Licks. He is perhaps best known for the songs “I Scare Myself” and “Canned Music.” His songs are frequently infused with humor, as evidenced by the title of his tune, “How Can I Miss You When You Won’t Go Away?” His latest album, Live at Davies, was released in 2013, capping over forty years of music released under his name.

Hicks was born in Little Rock, Arkansas on December 9, 1941.[1][2] His father, Ivan L. Hicks (married to the former Evelyn Kehl), was a career military man. At age five, an only child, Hicks moved with his family to California, eventually settling north of San Francisco in Santa Rosa, where he was a drummer in grade school and played the snare drum in his school marching band.

At 14, he was performing with area dance bands. While in high school, he had a rotating spot on Time Out for Teens, a daily 15-minute local radio program, and he went on to study broadcasting at San Francisco State College during the late 1950s and early 1960s.

In 1967, Hicks formed Dan Hicks and His Hot Licks with violinist David LaFlamme. LaFlamme left to form It’s a Beautiful Day, and was quickly replaced by jazz violinist “Symphony” Sid Page. Vocalists Sherry Snow and Christine Gancher, guitarist Jon Weber, and bassist Jaime Leopold filled out the band, unusual in having no drummer. This line-up was signed to Epic and in 1969 issued the album Original Recordings, produced by Bob Johnston. The first Hot Licks line-up lasted until 1971 and then disintegrated.

When Hicks reformed the band, Page and Leopold remained, and vocalists Naomi Ruth Eisenberg and Maryann Price joined, followed later by guitarist John Girton. This group recorded three albums, culminating in 1973’s Last Train to Hicksville (on which the group first added a drummer). After existing as a critical success only, this last album gained the group wider acclaim, as evidenced by Hicks’ appearance on the cover ofRolling Stone. Thus, it was a great surprise to many when he chose that moment to disband the Hot Licks. Asked why in 1974, he said:

“I didn’t want to be a bandleader anymore. It was a load and a load I didn’t want. I’m basically a loner… I like singing and stuff, but I didn’t necessarily want to be a bandleader. The thing had turned into a collective sort of thing – democracy, vote on this, do that. I conceived the thing. They wouldn’t be there if it wasn’t for me. My role as leader started diminishing, but it was my fault because I let it happen; I cared less as the thing went on.”

As time passed, this particular Hot Licks band became Hicks’ “classic” band, in part due to Page’s passionate fiddling, combining swing and classical training, as well as Price’s sultry jazz vocals in the style of Anita O’Day, reflecting her pre-Hicks performing experience. This particular group reunited for a 1991 taping of an hour-long Austin City Limits television broadcast in the 1992 season.

In 1993 the Acoustic Warriors continued to perform locally around San Francisco and on the road, but this edition placed Paul Robinson on guitar, Nils Molin or Alex Baum on string bass, Stevie Blacke on mandolinand Josh Riskin on drums.

Hicks recorded one CD with the Acoustic Warriors. Shootin’ Straight was released by Private Music in 1996. Recorded live at McCabe’s in Santa Monica, it featured Jim Boggio on accordion/piano, Stevie Blacke on mandolin/violin, Paul Robinson on guitar, Alex Baum on bass and Bob Scott on drums.

When he first appeared on the scene in the ’60s, Hicks was a young guy playing old sounds. But there was something fresh, even original about his approach then, and he hasn’t lost his special touch. His voice and his sly, humorous point of view set him apart from any crowd. Now that he’s an old-timer, his music seems even more solid and substantial.

Dan Hicks has the coolest friends. On his wonderful new album, Beatin’ the Heat (Surfdog), his first in years—Hicks gets some help from Elvis Costello, Rickie Lee Jones, Bette Midler, Tom Waits along with recent swing revivalist and onetime Stray Cats guitarist Brian Setzer. But Hicks—who for many years seemed to be hangin’ around Mill Valley not doing a whole lot of anything—knows this may be his chance for a real comeback. He doesn’t waste his shot, getting great work from his guests without letting them dominate. His voice—which suggests a straw boater hat, handlebar mustache, bow tie, seersucker suit and spats—is front and center, even when he’s dueting with Costello or Jones. “Meet Me on the Corner,” a highlight here, finds Setzer delivering a burning rockabilly guitar solo and Costello offering a frantic vocal, all the better to show off Hicks’ singing and writing. Going head to head with Waits on “I’ll Tell You Why That Is,” a song way over in Waits’ territory, Hicks still stands out. (Waits’ vocal turn is a knockout too—not to be missed.)

I even think some of the songs that feature no one but Hicks and his current version of the Hot Licks (Sid Page on violin, Kevin Smith on upright bass, Gregg Bissonette on drums, and Jessica Harperand Karla De Vito on background vocals), such as “Hummin’ To Myself” and “He Don’t Care,” may be the strongest here… Hicks’ arrangements make use of banjo, fiddle and Django Reinhardt–like jazz guitar at times. He uses doo-wop style harmony singers to play against affable lead vocals laced with dry, dry humor.[4]

The Surfdog album reinvigorated Hicks, and the guests reflected their longtime admiration for the Hot Licks. This Surfdog success led to several more albums for Surfdog, including a 2007 downloadable compilation of Hicks’s previously released duets. Until his final bout with cancer, Dan and the Hot Licks continued to tour internationally.

As a side venture, in recent years Dan occasionally played jazz standards at intimate venues in the San Francisco Bay Area with Bayside Jazz.[5] Backed by a combo of Hot Licks, Acoustic Warriors and other seasoned pros, he put his spin on standards.

“Nobody’s ever come up with a proper label for Dan Hicks. That’s partly because he leapt over the vast jazz divide created by bop. Bebop subdivided the rhythm and broke the melody into cubist fragments until swing was something you did between your ears instead of out on the dance floor. But there was a time from the ’20s through the ’40s when swing—“hot rhythm”—rippled through every form of popular music. That’s the music Dan Hicks plays, and there’s no single word for it because it wasn’t limited to any one genre. Django Reinhardt, the Mills Brothers, Spade Cooley, Hank Garland, the Boswell Sisters, Stuff Smith, and Bing Crosby all swung. You can make yourself nutty trying to define what Dan Hicks is. Then again, you could just say: Dan Hicks swings. And while he may be an idler and a roué, nobody’s written ten better songs about breezing down the road than Dan Hicks. And in the rarefied genre of songs about buzzards & bacon grease, well, he’s the master.”[6]

Onstage at the Carouse; in Missoula, Montana in the Fall of 1987, he described his music as “folk jazz”.

”Throughout his decades-long career, Dan Hicks stood as one of contemporary music’s true eccentrics. While steeped in folk, his acoustic sound knew few musical boundaries, drawing on country, call-and-response vocals, jazz phrasing, and no small amount of humor to create a distinctive, albeit sporadic, body of work which earned him a devoted cult following.”[7]

Dan describing his music in a July 3, 2007 interview before a gig at the Riverwalk Center in Breckenridge, CO (YouTube):

“My music is kind of a blending. We have acoustic instruments. It starts out with kind of a folk music sound, and we add a jazz beat and solos and singing. We have the two girls that sing, and jazz violin, and all that, so it’s kind of light in nature, it’s not loud. And, it’s sort of, in a way, kinda carefree. Most of the songs are, I wouldn’t say funny, but kinda maybe a little humorous. We all like jazz, so we like to play in a jazzy way, with a swing sound you know, so I call it “folk swing”. There are a lot of original tunes that I’ve been writing through the years, so that has its personal touch on it.”[8]

In the Michael Apted film Class Action (1991) with Gene Hackman, Hicks is seen performing with Eisenberg and Price at Rosatti’s in San Francisco. He also can be seen in several documentary films, includingRevolution (1968) and Rockin at the Red Dog (1996).

On his 1984 album The Flat Earth, Thomas Dolby performed “I Scare Myself”, which reached the UK Singles Chart, peaking at No. 46.[13]