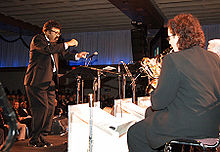 David Nathaniel Baker Jr. (December 21, 1931 – March 26, 2016) was an American symphonic jazz composer at the Indiana University Jacobs School of Music inBloomington.[1] He has more than 65 recordings, 70 books, and 400 articles to his credit.

Baker was born in Indianapolis, Indiana, and attended Crispus Attucks High School. He was educated at Indiana University, earning the Bachelor of Music degree in 1953 and the Master of Music in 1954. Baker studied with J. J. Johnson, János Starker, and George Russell.[2]

His first teaching position was at Lincoln University in Jefferson, Missouri in 1955. Lincoln is a historic black institution, but it had recently begun to admit a broad diversity of students. Baker was resigned his position under threats of violence after he had eloped to Chicago to marry white opera singer Eugenia (“Jeannie”) Marie Jones. Missouri still had anti-miscegenation laws.[3] One of Baker’s students at Lincoln University was the composer John Elwood Price.[4]

Baker thrived in the Indianapolis jazz scene of the time, serving as a mentor of sorts to Indianapolis-born trumpeter Freddie Hubbard. Originally a talented trombonist, he was forced to abandon that instrument after a jaw injury left him unable to play (although he played on the George Russell Sextet album Ezz-thetics after sustaining the injury).[5]

Following the injury, he learned to play cello, a rare instrument in the jazz world.

Baker’s shift to cello largely ended his career as a performer and marked a period of increased interest in composition and pedagogy. Among the first and most important people to begin to codify the then largely aural tradition of jazz he wrote several seminal books on jazz, including Jazz Improvisation in 1988.[6]

Baker’s compositional works are often cited as examples of the Third Stream Jazz movement, although they run the gamut from traditional jazz compositions intended for improvisation, to through-composed symphonic works. He has written over 2,000 compositions.

Baker was nominated for the 1973 Pulitzer Prize. He has also been nominated for a Grammy Award (1979). He was honored three times by Down Beat magazine: as a trombonist, for lifetime achievement, and most recently, in 1994, as the third inductee to their jazz Education Hall of Fame. He received the National Association of Jazz Educators Hall of Fame Award (1981), President’s Award for Distinguished Teaching (1986) from Indiana University, the Arts Midwest Jazz Masters Award (1990), and the Governor’s Arts Award of the State of Indiana (1991).

A dedicated music educator as well as composer and performer, Mr. Baker’s involvement in music organizations encompassed membership on the National Council on the Arts; board positions for the American Symphony Orchestra League, Arts Midwest, and the Afro-American Bicentennial Hall of Fame/Museum; and past chairs of the Jazz Advisory Panel to the Kennedy Center and the jazz/Folk/Ethnic Panel of the NEA. He was president of the International Association for Jazz Education, and later president of the National jazz Service Organization and senior consultant for music programs for the Smithsonian Institution.

Baker performed with his second wife Lida, a flautist, since the 1990s. He died on March 26, 2016, at age 84 at his Bloomington, Indiana home. He was survived by his wife and daughter.[9]