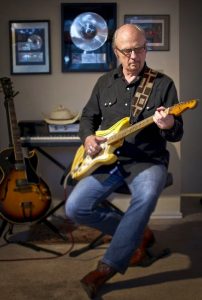 Freeman spent his adolescence in Dallas, Texas in the late 1950s and played in a rock group called “The Corals” while in high school. He went to college in North Texas, and had a brief stay in Los Angeles, before relocating in 1970 to Austin, Texas.[1][3] He was co-lead guitarist in the Cobras with Stevie Ray Vaughan,[2] then in 1972, became a founding member of Southern Feeling, along with W. C. Clark and Angela Strehli.[4] He later recorded with Lou Ann Barton.[2] Freeman lived and played with both Jimmie and Stevie Ray Vaughan throughout the 1970s and 1980s. He played piano on Jimmie Vaughan’s first solo tour, and on a James Cotton album. At Antone’s nightclub in the early 1980s, Freeman was a member of the house band and backed Otis Rush, Albert Collins, Buddy Guy, Junior Wells, and Lazy Lester.[1]

After touring with Jimmie Vaughan in the mid 1990s he toured with Taj Mahal until 2002. A songwriter on his five mainly instrumental albums, Freeman lived again in Los Angeles from 1992 until 2004.[1] Freeman played with Bob Dylan‘s backing band between 2005 and 2009.[5] Dylan’s album, Modern Times was recorded with Dylan’s then touring band, including Freeman, Tony Garnier, George G Receli, Stu Kimball, plus multi-instrumentalist Donnie Herron. During a 2006 interview with Rolling Stone, Dylan spoke about his current band:

This is the best band I’ve ever been in, I’ve ever had, man for man. When you play with guys a hundred times a year, you know what you can and can’t do, what they’re good at, whether you want ’em there. It takes a long time to find a band of individual players. Most bands are gangs. Whether it’s a metal group or pop rock, whatever, you get that gang mentality. But for those of us who went back further, gangs were the mob. The gang was not what anybody aspired to. On this record (Modern Times) I didn’t have anybody to teach. I got guys now in my band, they can whip up anything, they surprise even me.[6]

In 2009 Freeman was inducted into The Austin Chronicle Austin Music Awards Hall of Fame.[17]