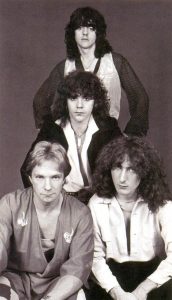 Carter left the band in August 1980 after the band’s UK tour with Ted Nugent in order to join UFO and later Gary Moore. His replacement was guitarist John Lockton (ex-Next Band, Red Alert) whose first appearance was on the band’s Japanese tour in the autumn of 1980 followed by the release of the Stand Your Ground album in the spring of 1981.[1]

In June 1981, Robertson and Edwards both left Wild Horses in the wake of the band’s Paris Theatre show in London. Robertson teamed up with Motörhead a year later and recorded Another Perfect Day in 1983,[1] before moving on to join fellow Scotsman Frankie Miller on the Dancing in the Rain album in 1986. Edwards continued with a number of different acts, including Bernie Marsden‘s S.O.S., Grand Prix, and Lionheart.

Wild Horses members Laurence Archer and Clive Edwards were part of the UFO line-up that recorded the High Stakes & Dangerous Men and Lights Out in Tokyo albums in the early 1990s, before spending time in Medicine Head. After being involved with the reformed Stampede, Archer and Edwards launched X-UFO in the summer of 2011 along with Rocky Newton and Danny Peyronel.

Both Wild Horses and Stand Your Ground have seen repeated re-issues over the years, the first coming in 1993 via EMI-Toshiba Japan as part of the ‘Legendary Masters’ series. European re-issues, including various bonus tracks, followed in 1999 (Zoom Club), 2009 (Krescendo), and 2013 (Rock Candy).

On 25 February 2014, a bootleg quality Wild Horses live album, titled Live In Japan 1980, recorded at the band’s Nakano Sun Plaza, Tokyo gig on 29 October 1980, was issued via Krescendo. The same recording had first surfaced in 2012 as a Japanese bootleg titled Heavy Ride.