Last night was one of the coolest nights of my life. I was inducted into The Rhythm & Blues Music Hall of Fame.

The ceremony was in Detroit this year and I went in with a class that included Aretha Franklin, Sam Cooke, Martha Reeves, The Miracles, and Ray Charles. Wow! This is like high school. I’m hanging with some really cool people in the hall.

Being the only non-singer in the class, it’s hard to express how honored I feel, but I’ll tell you what I told the audience last night.

I’ve always felt that everyone who couldn’t sing wanted to sing, and that musicians were always the coolest people in the room. I never felt I was cool enough to be in their group, but last night they gave me some cool and let me in. With a standing ovation no less.

Being in the Radio or TV Hall of Fame is an incredible honor, but to be inducted into a music Hall of Fame, takes it to another level for me. Because that says that even though you weren’t a part of our business, you impacted it significantly. Now that’s COOL!

Jerome, get me some sunglasses and a mirror. 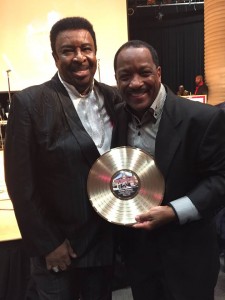