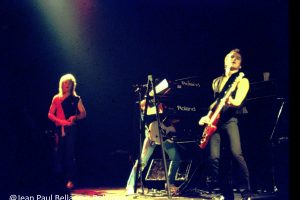 Douglas Lubahn (born December 20, 1947; died November 20, 2019) was a psychedelic rock and jazz rock bassist who has played with internationally famous bands. His work is featured on three albums recorded by The Doors.

In 1965, Lubahn was working in a ski resort in Aspen, Colorado, USA as a ski instructor, when he ran across Cass Elliot, who was with a group called The Candy Store. As Lubahn and Elliot got to know each other, she encouraged Lubahn to travel to Los Angeles, California to try to find a band there, because at the time many bands were in need of bassists.[1][2]

In Los Angeles, 1966, Lubahn was a founding member of the band Clear Light.[1] Clear Light was the only album the band created before they split up.[3] Their top song, “Mr. Blue”, has been referred to as “long and a bit overbaked, but it does have an odd appeal”.[4] A review by Matthew Greenwald stated that they “combined folk, rock, psychedelia, and even a touch of classical to their sound”, continuing on to say that “the end result, though, is a little ponderous and pretentious, but strangely listenable”.[4]

One day, Clear Light’s producer, Paul Rothchild, asked Lubahn to work on sessions for The Doors‘ second album; as the group lacked a bass guitarist, uncredited session bassist Larry Knechtel had doubled Ray Manzarek‘s keyboard bass lines on select tracks from their debut album.[2][5] In contrast to Knechtel, Lubahn played on seven of the ten tracks on Strange Days (1967) as a credited contributor.[5] The Doors invited Lubahn to join the group as a full-time member during the Strange Days sessions, using Rothchild as a messenger; however, Lubahn declined the offer for multiple reasons, including his refusal to leave Clear Light.[2] He also played on all but two tracks on Waiting For The Sun (1968) and, albeit less prolifically, on The Soft Parade (1969).[2][5]

Lubahn was the bassist and co-lead vocalist for the band Pierce Arrow who issued two albums, Pierce Arrow (1977) and Pity the Rich (1978), on Columbia Records. The band also featured guitarist Werner Fritzsching, whom he would collaborate with again in Riff Raff, and drummer Bobby Chouinard, who would later pull Lubahn into Billy Squier‘s band.

Lubahn was the bassist and lead vocalist for the U.S. rock band Riff Raff whose sole album, Vinyl Futures, was released on Atco Records in 1981. Vinyl Futures features the Lubahn penned song “Treat Me Right”,[8] which was a Billboard Top 20 hit for Pat Benatar and helped push her 1980 album Crimes of Passion to quadruple platinum sales in the U.S..