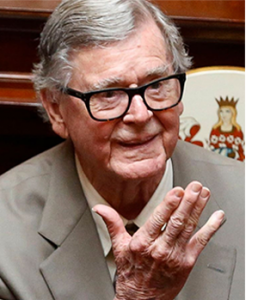 Earl Henry Hamner, Jr. (July 10, 1923 – March 24, 2016) was an American television writer and producer (sometimes credited as Earl Hamner), best known for his work in the 1970s and 1980s on the long-running CBS series The Waltons and Falcon Crest. As a novelist, he was best known for Spencer’s Mountain, which was inspired by his own childhood and formed the basis for both the film of the same name and the television series The Waltons, for which he provided voice-over narration.

The family of Hamner’s mother, the Gianninis, were immigrants who came to the United States from Lucca, Italy in the 1700s[citation needed]. His father’s family came to Virginia from Wales, where his ancestors, the Spencers and the Hamners, had been for more than a thousand years before immigrating[citation needed]. Until the 1900s, the Hamners were tobacco farmers near James River, Virginia, when they moved to Schuyler located on the eastern slopes of the Blue Ridge Mountains.[citation needed]

A company town where the economy was based in soapstone mining by New Alberene Stone, Schuyler was hit hard by the Great Depression, and thus the company and its mines were forced to close. Hamner’s father worked in the mines from the time his oldest son was born until the company’s closing. After losing his job, Earl, Sr. could only find work as a machinist at the DuPont factory in Waynesboro, Virginia, about 30 miles away. Due to the distance between home and work, Earl, Sr. lived at a boarding house in Waynesboro during the week and travelled back to Schuyler and his family on the weekend. Taking a bus from Waynesboro to Charlottesville and another stop along the way, Hamner’s father would walk six miles to the family home at the end of his weekly journey. Taking that walk on a snowy Christmas Eve in 1933 was the inspiration for “The Homecoming”, Hamner’s 1970 novel, which became a Christmas special and the pilot for The Waltons in 1971.[1]

In 1954, Hamner wrote “Hit and Run”, an episode of the NBC legal drama Justice, in which guest star E.G. Marshall played a man haunted for his crime of striking a newsboy on a bicycle and fleeing the scene of the accident.[3] He reprised the theme in the 1964 “You Drive” episode of The Twilight Zone.[4]

Hamner contributed with eight episodes, in the early 1960s, to the CBS science fiction series The Twilight Zone. His first script acceptance for the series was his big writing break in Hollywood. He also wrote or co-wrote eight episodes of the CBS animal series Gentle Ben (1967-1969) and four episodes of the ABC sitcom Nanny and the Professor (1970).