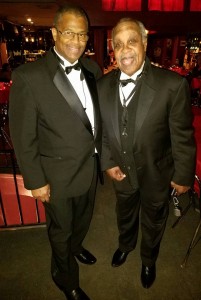 Eddie Pazant rose from childhood in South Carolina to become one of the great horn players of his time, working with such jazz greats as Lionel Hampton and Dizzie Gillespie, but also making a mark in the soul music world working with The Manhattans and Kool & the Gang, among others.

Pazant got his first big break when Lionel Hampton discovered him in the late 40s and hired him to be part of his orchestra, a position that lasted a decade and a half. By the mid-60s, the Pazant Brothers joined together and became among the leaders of the jazz movement in Harlem. They also became among the most sought after musicians in the New York scene, and worked on albums with countless jazz and R&B stars, as well as forming musical collections like the Cotton Club All-Stars. If there was a common thread through their reputation as musicians, it was that they could play just about any style, and make it their own.

Noted keyboardist and Dancing With The Stars music director Ray Chew told us: “Ed Pazant.. good friend, great player. Spent a lot of years working with The Pazant Brothers. They taught me so much. He will be greatly missed.”

While he may not have been a household name, musicians around the world are bowing their heads today, and taking a moment to remember the greatness of Eddie Pazant.