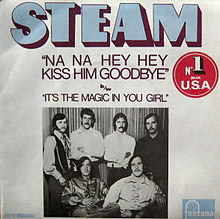 “Na Na Hey Hey Kiss Him Goodbye” is a song written and recorded by Paul Leka, Gary DeCarlo and Dale Frashuer, attributed to a then-fictitious band they named “Steam“. It was released under the Mercury subsidiary label Fontana and became a number one pop single on the Billboard Hot 100 in late 1969, and remained on the charts in early 1970.[1] In 1977, Chicago White Sox organist Nancy Faust began playing the song when White Sox sluggers knocked out the opposing pitcher. The fans would sing and a sports ritual was born. The song’s chorus remains well-known, and is still frequently used as a crowd chant at many sporting events generally directed at the losing side in an elimination contest when the outcome is all but certain or when an individual player is ejected or disqualified. It has also been observed by crowds in political rallies to drown out and mock disruptive protestors who are being escorted out by security.

Paul Leka, Gary DeCarlo and Dale Frashuer wrote a blues shuffle version of the song in the early 1960s when they were members of a doo-wop group from Bridgeport, Connecticut, called the Glenwoods, the Citations, and the Chateaus, of which Leka was the piano player. The group disbanded when Leka talked Frashuer into going into New York City with him to write and possibly produce. (Coincidentally or not, the first half of the first verse has very similar lyrics and chord progression to the first half of the chorus of the 1960 song “He Will Break Your Heart” by Jerry Butler.) In 1968, DeCarlo recorded four songs at Mercury Records in New York with Leka as producer. The singles impressed the company’s executives, who wanted to issue all of them as A-side singles. In need of a B-side, Leka and DeCarlo resurrected an old song from their days as the Glenwoods, “Kiss Him Goodbye”, with their old bandmate, Frashuer.[citation needed]

With DeCarlo as lead vocalist, they recorded the song in one recording session. Instead of using a full band, Leka played keyboards himself and had engineer Warren Dewey splice together a drum track from one of DeCarlo’s four singles and a conga drum solo by Ange DiGeronimo recorded in Mr. Leka’s Bridgeport, Conn. studio for an entirely different session.[2] “I said we should put a chorus to it (to make it longer)”, Leka told Fred Bronson in The Billboard Book of Number One Hits. “I started writing while I was sitting at the piano going ‘na, na, na, na, na, na, na, na’… Everything was ‘na na’ when you didn’t have a lyric.” Gary added “hey hey”.[3] The group that is seen on the album cover and in the old black and white video was a road group that had nothing to do with the recording. The road group was lip syncing to DeCarlo’s vocal in the video.[citation needed]

The Supremes included a cover of the song on their 1970 album New Ways but Love Stays.

The Belmonts recorded an acappella version, which can be found as a track on their 1972 album Cigars, Acappella, Candy.

In February 1983, UK girl group Bananarama released the song as a single from their album Deep Sea Skiving. This version became a top ten hit in the United Kingdom (#5), but only a minor hit in the US (Billboard #101) later that year.[citation needed]

In 1987, Canadian quartet The Nylons released an a cappella version of this song as a single under the shortened title “Kiss Him Goodbye”. It became their biggest hit on the Billboard Hot 100, peaking at number twelve that summer.[5] Nigerian Reggae artist Majek Fashek sampled the chorus for the song “Free Africa, Free Mandela”.

In 1998, Sugar Beats covered this song which includes a rap breakdown.

In 2009, Kristinia DeBarge heavily sampled “Na Na Hey Hey Kiss Him Goodbye” in her debut single “Goodbye.” The song would eventually reach the top 20 of the Billboard Hot 100, peaking at #15.

In 2014 the Norwegian artist Adelén used the chorus line of the song on her World Cup song “Olé.” The song was one of the tracks on the One Love, One Rhythm – The 2014 FIFA World Cup Official Album. The song peaked at number #3 in Norway.

This was the fifth single released from their first album in 1983. It peaked at number five in the UK singles chart, and number 38 in Australia on the Kent Music Report chart.[7]

The music video features the band playing in a school playground and then being made to move by a group of lads. They then decide to join a boxing club so the video features them singing the song whilst boxing. By the end of the video they return to the playground wearing leathers and this time make the group of lads move away. They then ride off into the night on motorbikes.

In the Futurama movie Bender’s Big Score, the nudist aliens sing this song, crudely changing the word “goodbye” to “we took your stuff” to better suit the situation.

Steam’s version appears in a 2015 TV commercial for Sprint. The song is often used as a sports chant aimed toward a losing team, popularized in particular by stadium organist Nancy Faust at home games of baseball’s Chicago White Sox, and is often chanted in WWE events whenever a performer or authority figure (usually a heel) is fired, or an unpopular politician is defeated.[citation needed] It is similarly used by various clubs during Association Football matches when a player (traditionally from the away side) is given a red card and has to walk off the pitch. It is also used frequently in the 2000 movie Remember the Titans. On MTV’s game show Remote Control, which was on the air from 1987 to 1990, the audience would often sing this song as a losing contestant was removed from the set.[citation needed] It was parodied by Dash Rip Rock as “Marijuana, Marijuana, Hey Hey, Get High”.

On May 4, 2017, after the House of Representatives voted to pass the American Health Care Act, Democratic representatives chanted “Na na na na, hey hey, goodbye” to Republican representatives, implying that in voting for the bill, they would lose their seats in the House in the next election. DeCarlo was happy to hear of the song getting renewed exposure, but said he opposed Obamacare.[8] It was not the first time the song had been sung in Congress; in 1993, after Democrats voted for then-President Bill Clinton’s tax bill, House Republicans sung “Goodbye”. [9]