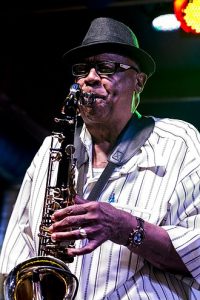 Grady Gaines (May 14, 1934 – January 29, 2021)[2] was an American electric blues, Texas blues and jazz blues tenor saxophonist, who performed and recorded with Little Richard in the 1950s. He backed other musicians such as Dee Clark, Little Willie John, Sam Cooke, James Brown, Jackie Wilson, and Joe Tex. He released three albums.[1]

Gaines was playing his saxophone at The Whispering Pines.

Gaines worked as a session musician for Peacock Records.[4] He played on Big Walter Price‘s “Pack Fair and Square” and Clarence “Gatemouth” Brown‘s “Dirty Work at the Crossroads,” before joining Little Richard’s fledgling backing band, the Upsetters, as its leader in 1955.[1] Gaines recorded infrequently, but he played on Richard’s “Keep a Knockin'” and “Ooh! My Soul.”[1]

Once the Upsetters disbanded, Grady toured with Millie Jackson and Curtis Mayfield. He stopped playing in 1980.[1]

In 1980, Gaines became a transportation manager for Holiday Inn and later Sheraton.[5]

Gaines performed in 1989 and 1996 at the Long Beach Blues Festival. As of January 2013, he continued to perform with the Texas Upsetters for private parties and wedding receptions and for public events, such as the Big Easy Social & Pleasure Club in Houston’s Rice Village neighborhood.[citation needed]

Gaines’ wife was Nell Gaines, they remained married until his death in 2021.[7]