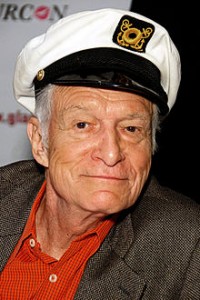 Hugh Marston Hefner (April 9, 1926 – September 27, 2017) was an American magazine publisher, editor, businessman, and playboy. He was best known as the editor-in-chief and publisher of Playboy magazine, which he founded in 1953. He was also the founder and chief creative officer of Playboy Enterprises, the publishing group that operates the magazine.[1] Hefner was also a political activist and philanthropist in several causes and public issues.

He attended Sayre Elementary School and Steinmetz High School, then during World War II, served as a writer for a military newspaper in the U.S. Army from 1944 to 1946. Hefner graduated from the University of Illinois at Urbana Champaign with a bachelor of arts in psychology and a double minor in creative writing and art in 1949, earning his degree in two and a half years. After graduation, he took a semester of graduate courses in sociology at Northwestern University but dropped out soon after.[13] 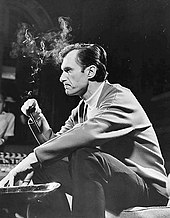 Hefner with his trademark Playboy Pipe in 1966

After the Charles Beaumont science fiction short story “The Crooked Man” was rejected by Esquire magazine in 1955, Hefner agreed to publish it in Playboy. The story highlighted straight men being persecuted in a world where homosexuality was the norm. After the magazine received angry letters, Hefner wrote a response to criticism where he said, “If it was wrong to persecute heterosexuals in a homosexual society then the reverse was wrong, too.”[17]In 1961, Hefner watched Dick Gregory perform at the Herman Roberts Show Bar in Chicago. Based on that performance, Hefner hired Gregory to work at the Chicago Playboy Club; Gregory attributed the subsequent launch of his career to that night.[18]

On June 4, 1963, Hefner was arrested for promoting obscene literature after an issue of Playboy featuring nude shots of Jayne Mansfield was published.[19] The case went to trial and resulted in a hung jury.[20]

In the 1993 The Simpsons episode “Krusty Gets Kancelled“, Hefner guest-voiced himself.[21][22] In 1999, Hefner financed the Clara Bowdocumentary, Discovering the It Girl. “Nobody has what Clara had. She defined an era and made her mark on the nation,” he stated.[23] Hefner guest-starred as himself in a 2006 episode of Seth Green‘s Robot Chicken on the late-night programming block Adult Swim.[22] He has a star on the Hollywood Walk of Fame for television and has made several movie appearances as himself. In 2009, he received a “worst supporting actor” nomination for a Razzie award for his performance as himself in Miss March. On his official Twitter account he joked about this nomination: “Maybe I didn’t understand the character.” [24]

A documentary by Brigitte Berman, Hugh Hefner: Playboy, Activist and Rebel, was released on July 30, 2010. He had previously granted full access to documentary filmmaker and television producer Kevin Burns for the A&E Biography special Hugh Hefner: American Playboy in 1996.[25] Hefner and Burns later collaborated on numerous other television projects, most notably on The Girls Next Door, a reality series that ran for six seasons (2005–2009) and 90 episodes.[26] 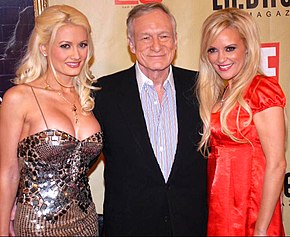 In 1949, Hefner married Northwestern University student Mildred (“Millie”) Williams, who was also born in 1926. They had two children: daughter Christie Hefner (born 1952) and son David (born 1955).[27] Before the wedding, Mildred confessed that she had an affair while he was away in the army. He called the admission “the most devastating moment of my life.” A 2006 E! True Hollywood Story profile of Hefner revealed that Mildred allowed him to have sex with other women, out of guilt for her infidelity and in the fond hope that it would preserve their marriage. The two were divorced in 1959.[28][29]

Hefner remade himself as a bon vivant and man about town, a lifestyle he promoted in his magazine and two TV shows he hosted, Playboy’s Penthouse (1959–1960) and Playboy After Dark (1969–1970). He admitted to being “‘involved’ with maybe eleven out of twelve months’ worth of Playmates” during some of these years.[30] Donna Michelle, Marilyn Cole, Lillian Müller, Shannon Tweed, Barbi Benton, Karen Christy, Sondra Theodore, and Carrie Leigh — who filed a $35 million palimony suit against him — were a few of his many lovers. In 1971, he acknowledged that he experimented in bisexuality.[31] Also in 1971, Hefner established a second residence in Los Angeles with the acquisition of Playboy Mansion West and, in 1975, moved there permanently from Chicago.[32]

Hefner had a minor stroke in 1985 at the age of 59. After re-evaluating his lifestyle, he made several changes. The wild, all-night parties were toned down significantly and in 1988, daughter Christie began to run the Playboy empire. The following year, he married Playmate of the Year Kimberley Conrad; they were thirty-six years apart in age. The couple had two sons: Marston Glenn (born 1990) and Cooper Bradford (born 1991).[33] The E! True Hollywood Story profile noted that the notorious Playboy Mansion had been transformed into a family-friendly homestead. After he and Conrad separated in 1998, she moved into a house next door to the mansion.[34]

In January 2009, Hefner started dating Crystal Harris,[35] joining the Shannon Twins after his previous “number one girlfriend”, Holly Madison, had ended their 7-year relationship.[36] On December 24, 2010, he became engaged to Harris, to become his third wife.[37] Harris broke off their engagement on June 14, 2011, five days before their planned wedding.[38] In anticipation of the wedding, the July issue of Playboy, which reached store shelves and customer’s homes within days of the wedding date, featured Harris on the cover and in a photo spread as well. The headline on the cover read “Introducing America’s Princess, Mrs. Crystal Hefner”.[39]

Hefner became known for moving an ever-changing coterie of young women into the Playboy Mansion, including twins Sandy and Mandy Bentley. He dated as many as seven women concurrently. He also dated Brande Roderick, Izabella St. James, Tina Marie Jordan, Holly Madison, Bridget Marquardt, and Kendra Wilkinson. Madison, Wilkinson and Marquardt appeared on The Girls Next Door depicting their lives at the Playboy Mansion.[41] In October 2008, all three girls decided to leave the mansion. Hefner soon began dating his new “Number One” girlfriend, Crystal Harris,[42] along with identical twin models Kristina and Karissa Shannon.[43] The relationship with the twins ended in January 2010.[44] After an 11-year separation, Hefner filed for divorce from Conrad, citing irreconcilable differences.[45] Hefner has stated that he only remained nominally married to her for the sake of his children,[46] and his youngest child had just turned 18.[33] On December 24, 2010, Hefner presented an engagement ring to Crystal Harris, publicly announcing the proposal the following day.[15] Hefner and Harris had planned to marry June 18, 2011.[47][48] Harris called off the wedding just 5 days before they were due to be wed.[49] Twenty-six-year-old Harris and eighty-six-year-old Hefner reconciled and were married on December 31, 2012.[50][51][52]

In 2012, Hefner announced that his youngest son, Cooper, would likely succeed him as the public face of Playboy.[53]

In January 2016, the Playboy Mansion was put on the market for $200 million, on condition that Hugh Hefner would continue to work and live in the mansion.[54] It was later sold to Daren Metropoulos, a principal at private equity firm Metropoulos & Co, for $100 million. Metropoulos plans to reconnect the Playboy Mansion property with a neighboring estate that he purchased in 2009, combining the two for a 7.3 acre (3-hectare) compound as his own private residence.[55]

The Hugh M. Hefner First Amendment Award was created by Christie Hefner “to honor individuals who have made significant contributions in the vital effort to protect and enhance First Amendment rights for Americans.”[56]

He donated and raised money for the Democratic Party.[57] However, he had more recently referred to himself as an independent due to disillusionment with both the Democratic and Republicanparties.[58] However, in 2012, he supported Barack Obama‘s reelection campaign.[59]

In 1978, Hefner helped organize fund-raising efforts that led to the restoration of the Hollywood Sign. He hosted a gala fundraiser at the Playboy Mansion and personally contributed $27,000 (or 1/9 of the total restoration costs) by purchasing the letter Y in a ceremonial auction.[60][61]

Hefner donated $100,000 to the University of Southern California‘s School of Cinematic Arts to create a course called “Censorship in Cinema,” and $2 million to endow a chair for the study of American film.[62]

Both through his charitable foundation and individually, Hefner also contributed to charities outside the sphere of politics and publishing, throwing fundraiser events for Much Love Animal Rescue as well as Generation Rescue,[63] a controversial anti-vaccinationist campaign organization supported by Jenny McCarthy.

On November 18, 2010, Children of the Night founder and president Dr. Lois Lee presented Hefner with the organization’s first-ever Founder’s Hero of the Heart Award in appreciation for his unwavering dedication, commitment and generosity.[64] On April 26, 2010, Hefner donated the last $900,000 sought by a conservation group for a land purchase needed to stop the development of the famed vista of the Hollywood Sign.[60] Sylvilagus palustris hefneri, an endangered subspecies of Marsh rabbit, is named after him in honor of financial support that he provided.[65][66]

Hefner supported legalizing same-sex marriage, and he stated that a fight for gay marriage was “a fight for all our rights. Without it, we will turn back the sexual revolution and return to an earlier, puritanical time.”[67]