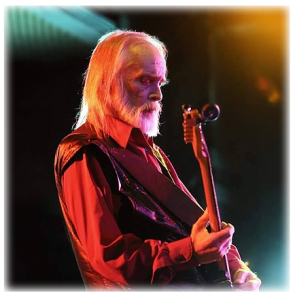 Blues Man, J.B. Ritchie was born in 1952. The self‐taught guitar master has toured with legends and been performing Blues music professionally since 1971.

As a child, music was always around. His mom played piano and loved listening to pop music and great artists like Frank Sinatra. “I didn’t know what I was meant to be until I heard Lonnie Mack play the song, Memphis when I was 10 years old,” said Blues Man J.B. Ritchie.

J.B. briefly played bass guitar in a high school pop band but soon realized guitar was his instrument and the blues was his music. He put together enough money to buy a Gibson Kalamazoo guitar and matching bass. For many years J.B. spent countless hours practicing in the basement of one of his best friends, his Grandmother. Ritchie made his own band playing slide and lead guitar, while his  brother played bass.

Upon graduating high school J.B. continued performing out at blues bars and big venues. In 1971 he formed the band, Liquid Chrome. It was a high-energy blues act that lasted for 8 years. The first gig he ever sang at was the Aragon Ballroom, as the opening act for Ted Nugent. J.B. Ritchie and The Liquid Chrome Blues Band became a national touring act, complete with their own groovy silver tour bus!

The Daily Herald said, “not only is he an extremely talented guitar player, he’s got all the moves down pat. When he walks on the stage with his Gibson Firebird, there’s no taking your eyes off him.” From 1979-1983 he began performing as J.B. Ritchie and The Rafters. One of J.B.’s favorite gigs was with Leon Russell at Haymakers.

1983-2003 he worked at Rainbow Bridge Records as a sound engineer, multimedia artist and studio musician.  J.B. worked with signed musicians, indie bands and corporate accounts such as Barilla, Rust-Oleum, Abbott Labs and more. He was part of the creative team with Tom Morello (of Rage Against the Machine) on the Gold Record soundtrack for the movie Spawn.

In 1988 he formed the J.B. Ritchie Band with his own specialized blues tone and signature sound.

In 1997 he released the album Power Blues with songs from some of his strongest influences, including Muddy Waters, Howlin’ Wolf and Albert King. Power Blues included Marty Binder on drums and Frank Bandy on bass. J.B. also played piano, guitar and was his sound engineer for the album.

Frank Bandy president of Teardrop Records told the Daily Herald, “I set out to form a band with Ritchie after seeing him play for the first time. I like the authenticity of his guitar playing…He’s like Muddy,” said Bandy, who toured with Muddy Waters’ guitarist Jimmy Rogers for 11 years. “I’ve played with a lot of guys over the years who dabbled in it, but he really gets it.” Bandy recalled the comments of a former Chess Records engineer at a recording session for a Ritchie demo, “he plays Muddy better than Muddy,” the engineer said.

Guy and many others.

On August 4th 2013, J.B. Ritchie was officially recognized and inducted as a Master Blues Artist in the Blues Hall of Fame, an American Heritage, International Organization.

The J.B. Ritchie Band continues to perform Blues and amaze crowds at every performance. Its heavy hitters include bassist Gunnar P. Collins, and Blues Harmonica

Party At The Moontower  and J.B. released a Latin-­Funk fusion song called, What It Takes To Be A Man.  The song was co-written and engineered with Ritchie.

J.B and P.A.T.M. also released a four song EP with veteran sound engineer, Chuck Macak of Electrowerks Recording. Macak commented on the band, “These guys have really created a cool

Their music video, I Need an Ugly Sweater Christmas Song is being featured in film festivals around the world including Global Film Festival (Award Winner), The European Cinematography Awards, Los Angeles Underground Film

Festival and many others.

The J.B. Ritchie Band featuring Dave Stacks Drums, Buzz Krantz Harp and Gunner P. Collins Bass is a premiere blues band and one of Chicago’s greatest jewels. They have been performing at top clubs for years and continue to dazzle crowd