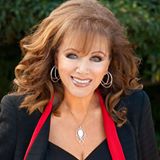 Jacqueline Jill “Jackie” Collins OBE (4 October 1937 – 19 September 2015)[1][2][3] was an English novelist. She wrote 32 novels, all of which have appeared on The New York Times bestsellers list. In total, her books have sold over 500 million copies and have been translated into 40 languages.[4][5] Eight of her novels have been adapted for the screen, either as films or television mini-series. She is the younger sister of actress Joan Collins.

Collins was born in Hampstead, London in 1937, the younger daughter of Elsa Bessant and Joseph William Collins (died 1988), a theatrical agent whose clients includedShirley Bassey, The Beatles and Tom Jones.[6] Collins’ South African-born father was Jewish and her British mother was Anglican.[7] A middle child, Collins has an elder sister, actress Joan Collins (born 1933) and a younger brother, Bill (born 1946).

Collins attended Francis Holland School, an independent day school for girls in London.[8] She was expelled from the school at age 15;[4][9] after which she threw her school uniform into the Thames.[10] For a brief period Jackie also was a stage singer and appeared alongside a very young Des O’Connor when they both featured in the billing for Lonnie Donegan on his UK tour about 1958. During this period she reportedly had a brief affair with Marlon Brando, who was 29 at the time.[11]

Like her sister, Collins began appearing in acting roles in a series of British B movies in the 1950s. She also made appearances in the 1960s ITC television series Danger Man and The Saint before giving up an acting career. Since then, she has played herself in a few television series, including Minder in 1980.

Collins’ first novel, The World Is Full of Married Men, was published in 1968. Romance writer Barbara Cartland called it “nasty, filthy and disgusting”.[12] It was banned in Australia[9] and South Africa,[5] but the scandal bolstered sales in the US and the UK. Collins’ second novel, The Stud, was published in 1969 and followed the sexually charged affairs of married Fontaine Khaled, who owns a fashionable London nightclub. It also made the bestseller lists.

Collins’ third novel, Sunday Simmons & Charlie Brick, (first published under the title The Hollywood Zoo in the UK and then retitled Sinners worldwide in 1984) was published in 1971 and again made the bestseller lists. This was Collins’ first novel to be set in the United States.

Lovehead followed in 1974 (retitled as The Love Killers in 1989). This novel was Collins’ first foray into the world of organized crime — a genre that would later prove to be extremely successful for her.

Following this, Collins published The World Is Full Of Divorced Women (unrelated to her first novel) in 1975, and then her longest novel, Lovers & Gamblers, in 1977 which told the story of rock/soul superstar Al King.

In the late 1970s, Collins made a foray into writing for the screen. She co-wrote the screenplay for the 1978 film version of her 1969 novel The Stud, which starred her older sister Joan as the gold-digging adulteress Fontaine Khaled. Following this, Collins wrote the screenplay for the film adaptation of her first novel The World Is Full Of Married Men, which was released in 1979. She also released her seventh novel, The Bitch, a sequel to The Stud, which was also made into a successful film the same year, with Joan Collins reprising the role. The film version of The Bitch was written and directed by Gerry O’Hara, based on Collins’ source novel. Also in 1979, Collins wrote an original screenplay (not based on any of her novels) for the film Yesterday’s Hero.

In the 1980s, Collins and her family moved to Los Angeles on a full-time basis. Her next novel was Chances, published in 1981. Collins described it as her first “Harold Robbins-type” novel, and it introduced her most famous character, Lucky Santangelo, the “dangerously beautiful” daughter of a one-time gangster Gino Santangelo.

While living in the hills above Sunset Boulevard, Collins collected the knowledge and experience to write her most successful novel, Hollywood Wives, which was published in 1983 and hit the New York Timesbestseller list at number one. Marketed as a “scandalous exposé”, the novel has sold over 15 million copies[13] and placed Collins in a powerful position and made her a celebrity of almost equal status to sister Joan, whose own career had taken an upwards direction with her role in the hit television drama Dynasty. In 1985, Hollywood Wives was made into a hugely successful television miniseries, produced by Aaron Spellingand starring Candice Bergen, Stefanie Powers, Angie Dickinson, Anthony Hopkins, Suzanne Somers and Rod Steiger. Although credited as “Creative Consultant”, Collins later stated that she was never consulted during production and that she did not agree with some of the casting choices.

In 1992, Collins was widowed when her husband of 26 years, Oscar Lerman, died of cancer. Around this time, she also wrote and produced another mini-series based on her third Lucky Santangelo novel Lady Boss(with Kim Delaney now playing the lead role).

In 1998, Collins made a foray into talk-show television with the series Jackie Collins’ Hollywood, but this was unsuccessful. She then released a new novel, Thrill (1998), and also wrote a four-part series of mini-novels to be released in a newspaper every six weeks called L.A. Connections, introducing a new heroine in the form of investigative journalist Madison Castelli. The fifth Lucky Santangelo novel, Dangerous Kiss, was published in 1999.

The 2000s turned out to be Collins’ busiest time and she published eight bestsellers, more than any other decade in her career. In 2000, Collins brought back the character of Madison Castelli in a new novel, Lethal Seduction. In 2001 she published Hollywood Wives: The New Generation, which was later turned into a television movie in 2003 starring Farrah Fawcett, Melissa Gilbert and Robin Givens (Collins was credited as Executive Producer).

In 2006, after being signed to the publisher Simon & Schuster for twenty years, Collins signed with St. Martin’s Press as her North American publisher, though she remains with Simon & Schuster internationally.

Collins continued with Lovers & Players in 2006 and the sixth Lucky Santangelo novel, Drop Dead Beautiful, in 2007. Her most recent novels include Married Lovers (2008), about the affairs of a female personal trainer named Cameron Paradise. This was followed in 2009 by Poor Little Bitch Girl, which stemmed from an idea Collins had worked on for a television series about heiresses that was ultimately never made. It features Bobby Santangelo Stanislopoulos (son of Lucky Santangelo and Dimitri Stanislopoulos) as a major character, and has cameo appearances by Lucky Santangelo, although Lucky does not feature as a major character in this novel.

In 2010, Paris Connections, a direct-to-DVD movie adapted from Collins’ L.A. Connections series of mini-novels was made by Amber Entertainment in association with the UK supermarket chain Tesco. The movie stars Charles Dance, Trudie Styler, and Nicole Steinwedell as Madison Castelli. Collins served as co-producer, and three more Connections movies with the Madison Castelli character are planned.[14]

Although Collins had stated on her official website that there would probably be no more Lucky Santangelo novels after Drop Dead Beautiful, in 2011 she published the seventh book in the series, Goddess of Vengeance. Also according to her official website, she is currently writing a play entitled Jackie Collins’ Hollywood Lies.

Collins latest novel, Confessions of a Wild Child, was published in September 2013. It is prequel to her popular Santangelo series and chronicles the teenage years of Lucky and her brother Dario.[15]

In 2014, Collins released The Lucky Santangelo Cookbook, a cookbook named after Lucky Santangelo, the protagonist of seven Collins novels, who is often portrayed preparing elaborate gastronomic creations for her intimates (and who watched her father throw a plate of food at her mother as a child).

Collins was appointed Officer of the Order of the British Empire (OBE) in the 2013 Birthday Honours for services to fiction and charity.[16][17]

Collins held dual citizenship; British (by birth) and U.S. (by naturalization, from 6 May 1960).

In 1965, Collins married for the second time to art gallery and nightclub (Ad-Lib, Tramp) owner, Oscar Lerman. They were married in the home of her sister Joan and Anthony Newley, who were married at the time. Collins and Lerman had two daughters, Tiffany (born 1967) and Rory (born 1969). Lerman also formally adopted Collins’ daughter, Tracy, from her previous marriage. Lerman died in 1992 from prostate cancer.

In 1994, Collins became engaged to Los Angeles business executive Frank Calcagnini, who died in 1998 from a brain tumour.

In the Sunday Times Rich List 2011, Collins was listed as the UK’s fifth richest author with an estimated personal fortune of £60 million ($96 million).