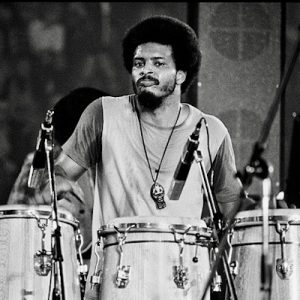 He came to prominence as a jazz musician, working with Miles Davis between 1971 and 1975. Mtume’s R&B group, also called Mtume, is best known for the 1983 R&B hit song “Juicy Fruit“, which has been repeatedly sampled. Mtume the band also had a top-five R&B hit with the single “You, Me, and He”.

Forman was born and raised in South Philadelphia. He was the son of jazz saxophonist Jimmy Heath,[1] but was raised by his stepfather, a Philadelphia local jazz pianist, James “Hen Gates” Forman.

Mtume grew up in a musical environment with jazz musicians frequenting his parents’ house. He learned to play piano and percussion; however, from his teenage years he was pursuing athletics as a swimmer, having achieved the title of the first black Middle Atlantic AAU champion in the backstroke, and in 1966 he entered Pasadena City College on a swimming scholarship.[1]

In 1966, Mtume joined the US Organization, a Black empowerment group founded by Hakim Jamal and Maulana Karenga, while a student at Pasadena City College. Mtume received his name, which means “messenger” in Swahili, from Karenga who gave members of the organization names to match their personality traits.[2] He was part of that group that celebrated the first Kwanzaa in 1966. In 1967 he co-edited The Quotable Karenga with Clyde Halisi, which has been called “the best expression of Karenga’s ideas”.[3] Mtume left the US Organisation in 1969.[4]

Mtume made two albums, Kawaida and Alekebulan: Land of the Blacks, intended to merge jazz and cultural identity.[5] Kawaida, which was recorded in December 1969, was Mtume’s professional debut. He contributed four out of five compositions and was credited with naming the album which means “norm” in Swahili and represented the practice and philosophy of pan-African identity. Performers on the album included Don Cherry, Herbie Hancock, Biily Bonner and his uncle Albert Heath.[6]

After his return from the West Coast he moved to New York and had his first gigs as a sideman for McCoy Tyner (Asante album), Freddie Hubbard and Miles Davis, whose group he wound up joining and playing in for the next few years.[7]

He and Mtume band member, fellow musician Reggie Lucas both won the Grammy Award for Best R&B Song for writing and producing fellow R&B artist Stephanie Mills‘ top-ten hit “Never Knew Love Like This Before“, for which she also won a Grammy for Best Female R&B Vocal Performance.

In July 2018, Mtume filed a lawsuit against Sony Music/Epic Records, hoping to reclaim the rights for two albums and his hit single “Juicy Fruit”. Mtume claimed to hold the sole copyright of these recordings, while Sony insisted that the albums were made for hire.[8]

“The Closer I Get to You” written with Reggie Lucas. Performed by Roberta Flack and Donny Hathaway on Blue Lights in the Basement. Atlantic Records, 1977.