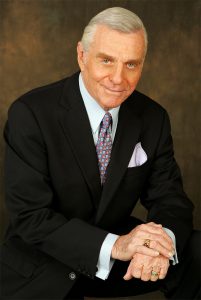 Jerry Douglas (November 12, 1932 – November 9, 2021) was an American television and film actor. For 25 years Douglas reigned as patriarch John Abbott in the fictional Genoa City on the daytime television serial The Young and the Restless. In 2006, his character was killed off, but his character later made special appearances.

Douglas was born as Gerald Rubenstein in Chelsea, Massachusetts in November 1932 to Russian Jewish immigrants, Rose (Silbert) and William Rubenstein, a junk seller and later mattress manufacturer.[1] His brother was record producer Alan Douglas.[2] Raised in Chelsea, he attended Brandeis University in pursuit of an economics degree. Eight months into law school in Boston, he gave up the books and began auditioning for acting roles. However, his lack of training frustrated him, and he eventually moved to California. There he met his first wife, Arlene Martel, who had a young son by the name of Adam Palmer. They went on to have two children of their own, Avra and Jod.

In March 2006, after 25 years on the show, Douglas departed The Young and The Restless in a storyline-dictated exit revolving around his character’s involvement in the Tom Fisher murder case. Douglas claimed that former headwriter of The Young and The Restless Lynn Marie Latham killed his character off because she could not understand why a man would run a cosmetics company.[3] He continued to recur on the show for the next few months and was put back on contract with the show in June to play his now-deceased character’s ghost. He left the show for good on August 18, but continued to make appearances once in a while. In March 2008 he began appearing as a new character Alistair Wallingford, a drunken hack actor involved in a gaslighting plot, but was written out a few months later.[citation needed]

In 2007, Douglas released a CD, The Best Is Yet to Come, a collection of jazz standards, and has performed around the United States and Canada.[citation needed]

Settling in the San Fernando Valley, Douglas sold insurance by day and took acting classes at night. Although he still struggled, he received encouragement after appearing in the play John Brown’s Body.

For several years, Douglas appeared on such TV shows as Mission: Impossible and The Feather and Father Gang, often portraying villains. At the same time, Martel decided to move herself and their two children, Avra and Jod, to Carmel. They eventually divorced. He remarried to Kymberly Bankier, whom he met at a Muscular Dystrophy Association event. They were married from April 6, 1985, until his death in 2021, and have a son, Hunter.

Douglas died after a brief illness in Los Angeles, California, on November 9, 2021, three days before his 89th birthday. He is survived by his wife Kym Douglas, as well as his sons, Jod and Hunter, and daughter Avra.[4]