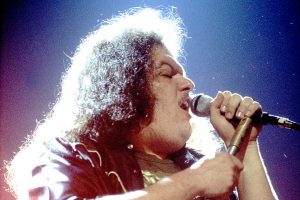 Jimmy Farrar (December 8, 1950 – October 29, 2018) was a singer, songwriter and musician born in La Grange, Georgia, originally lead singer of the Raw Energy band. He was also known as the second lead singer of the American Southern Rock band Molly Hatchet from 1980 to 1982, and in more recent years, Gator Country.

Jimmy Farrar started singing when he was a child, in his home town of La Grange, Georgia while listening to songs on the radio. Farrar remembered he had a maid who had a stack of 78 records that he listened to in his early childhood, as early as four years old. B.B. King, John Lee Hooker and other Blues and Motown artists were his influences.

In his late teens, Farrar moved to Atlanta where he was in a rock band named Intrepid with his friend Frank Holiday. After touring for a couple of years with another band named Catt.

In 1978, Farrar went back home to La Grange to work a regular job for two years, until joining the La Grange band Raw Energy Band as their lead singer. Raw Energy went on tour six nights a week, 52 songs per night. While in Daytona Beach, Florida in February 1980 the band met Rocky Membrettie, who was a former roadie for Molly Hatchet. Raw Energy put him to work with them as they continued touring, eventually ending up back in La Grange, Georgia, the home base of the band. Rocky Membrettie suggested the Raw Energy band make a tape and take it to Macon, Georgia to Pat Armstrong who was handling Molly Hatchet.

When Jimmy Farrar’s vocals were heard by Molly Hatchet’s producer, he was eyed as a possible replacement in 1980, when Danny Joe Brown was away from Molly Hatchet, he was replaced by vocalist Jimmy Farrar, a native of La Grange, Georgia, formerly of cover band Raw Energy.[citation needed]

Raw Energy Band actually began in La Grange, Georgia with original lead singer Phillip Turner who Jimmy Farrar later replaced, before joining Molly Hatchet. Molly Hatchet rented a club called the Warehouse. They set the entire concert stage up in there. They cranked up, Farrar sang three songs and they hired him on the spot, playing two shows there. Jimmy Farrar’s first gig with Molly Hatchet was set to be at the Tangerine Bowl in Orlando, Floridaopening for Bob Seger for an audience of 65,000 people, but Danny Joe Brown arrived at the last minute and the band did the show without him, which was Brown’s final show at that time with Molly Hatchet. The next show, on 9 May 1980, in front of 20,000 High School Seniors at King’s Dominion Amusement Park in Virginia, Farrar’s first with Molly Hatchet. Along with Jimmy Farrar came a new approach seemed to come to the band’s sound. The earlier albums feature more variation in guitar tone and style and exhibit a distinct southern cultural influence – which seemed to change with the addition of Farrar on vocals. By this time, acts such as Van Halen had made harder heavy metal-influenced rock popular in the 1980s, and may have led to a shift the band’s sound and style. Danny Joe Brown’s stage persona, gruff voice and cowboy horse-whistling had matched well with the overtly southern-influenced sounds of his era. Farrar’s new vocal style, mixed with a new harder-rocking sound has been seen as the reason for Molly Hatchet’s rise in popularity in the early 1980s. The first year Farrar was on tour with Molly Hatchet the band did almost 300 shows. At the end of the tour Molly Hatchet averaged 6.5 shows a week.

With the success of the next album, the Beatin’ the Odds release, the band ventured even farther away from the southern rock sound of their first albums. By 1981, Molly Hatchet had evolved to a straight-ahead rock style and a slicker production, exhibited on the Take No Prisoners release of the same year.[1] The band remained a successful act on the touring circuit. Founding member and bass player Banner Thomas left in 1983 and was replaced by Riff West, while Farrar also left Molly Hatchet in late 1982 for personal reasons, his last show being on 9 May 1982 at Six Flags in Atlanta.[1] He would later rejoin other members of Molly Hatchet in Southern Rock Allstars and Gator Country.

Brown rejoined the band in late 1982 after the departure of Farrar and B. B. Borden.

After leaving Molly Hatchet, Farrar played in a band called Predator for six years. Then he was the lead singer of the Section 8 band. In 1999, Farrar joined the Dixie Jam Band at the Jammin for DJB benefit, and spent several years as a member of the Southern Rock All-Stars.

In 2006, Gator Country, led by vocalist Jimmy Farrar, continued to perform popular songs such as “Beatin’ The Odds”, “Bounty Hunter” as well as “Oh Atlanta”.

On 19 June 2006, founding guitarist Duane Roland died at his home in St. Augustine, Florida, at the age of 53, according to Bobby Ingram on the Molly Hatchet MySpace website. He had been playing with the band Gator Country as late as May 2006. His death was listed as being of “natural causes” according to a 25 June 2006, The Boston Globe obituary report.[3]

In July 2008, the Gator Country band web site reported that lead singer Jimmy Farrar had suffered a mild stroke. According to the web site: “It is true that Jimmy, our beloved brother and front man, suffered a stroke a couple of weeks ago. He woke up, as he puts it, “Feelin’ kind of funky” on his left side. As strokes go, it was a mild one and he is having very minimal effects as a result. The first morning in the hospital they had him up and walking the halls and he’s been mobile ever since. The only complaint he has is a little weakness in his left arm. Some physical therapy is expected to help with that.”