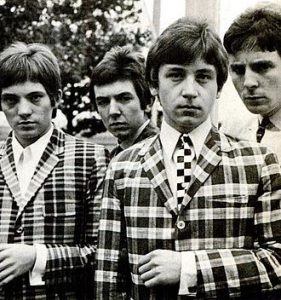 James Edward Winston Langwith (born 20 April 1945, in Stratford, London), known professionally as Jimmy Winston, was an English musician and actor. He was the original keyboard player with Small Faces.[1] Winston had apparently previously worked under the stage name James Moody, before switching to Winston as a possible reference to Winston Churchill.[2]

His acting credits include the 1968 stage musical Hair and the 1972 Doctor Who serial Day of the Daleks.

In early 1965, Winston, along with his acquaintance Steve Marriott, formed Small Faces with Ronnie Lane and Kenney Jones. While originally a guitarist, his role was soon shifted to become a keyboardist.[3] Winston was fundamental in the band’s emergence, as his parents owned the Ruskin Arms pub located in Manor Park, a place where the group would rehearse and occasionally perform.[4] After a performance at the Cavern Club on Leicester Square, an assistant of manager Don Arden stepped up to the band and managed to secure them a contract with Decca Records.[3] The band would go on to release their debut single “Whatcha Gonna Do About It” later that year, peaking at number 14.[5] The success of this single would be followed by “I’ve Got Mine“, which despite good reviews failed to chart. The group including Winston perform the song in Dateline Diamonds.[6] Shortly after this release, Winston left the group, and was promptly replaced by Ian McLagan.

A factor that has been rumoured about his termination is that during an episode of Thank Your Lucky Stars, Winston snubbed Marriott.[7] There has been controversy whether Winston left the group himself or was fired. Lane stated in an interview that he was fired:

Our original organist, Jimmy Winston, wasn’t working out. He couldn’t play – I mean, none of us could play, but we was keen. Jimmy Winston couldn’t play, and on top of it he had an ego as if he could play the piano, so he had to go! We chucked him out of the Small Faces. Very exciting times, the Sixties, there’ll never be another time like it, I’m sure.

However, Kenney Jones later said: “He [Winston] got above his station and tried to compete with Steve Marriott.” Reality is he left.[8]

(While he is credited as the sole keyboardist on their first two singles, Winston is also credited on some tracks on four further albums released by the band)

with Jimmy Winston and His Reflections[edit]