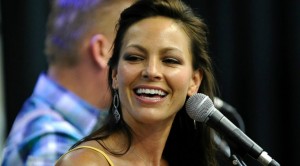 RIP . Your life and talent are an inspiration to so many. Godspeed.

Joey + Rory were an American country and bluegrass duo composed of singer-songwriters Rory Lee Feek and Joey Martin Feek, who were husband and wife. Joey was the duo’s lead vocalist, while Rory sung background vocals and played guitar. The duo was the third-place finalist on CMT‘s competition Can You Duet in 2008. That same year, Joey + Rory signed to Sugar Hill/Vanguard Records, releasing their debut album The Life of a Song in late October. This album’s lead-off single, “Cheater, Cheater“, was a Top 40 hit on the Billboard country charts. Although none of their other singles made top 40 on that chart, the duo released seven studio albums in total. Joey died on March 4, 2016.

Before the duo’s foundation, Rory Lee Feek worked as a songwriter in Nashville, Tennessee, and he has continued to work as a songwriter as a member of Joey + Rory. Songs he wrote for other artists include Clay Walker‘s Top Five hit “The Chain of Love“, Blake Shelton‘s Number One hit “Some Beach“, and Jimmy Wayne‘s 2008 single “I Will“. Rory also founded the independent label Giantslayer Records in 2004, on which Joey recorded a solo album entitled Strong Enough to Cry in 2005. This album was released in CD format and digital download in 2008.[1] Rory also recorded a solo album on Giantslayer Records, titled My Ol’ Man, which he made available only as a download.

Joey + Rory performed on the CMT competition Can You Duet in 2008, in which they were third-place finalists. Shortly after the competition, they were signed to the independent label Sugar Hill Records. They returned to the Can You Duet stage to perform “Cheater, Cheater” on “Original Song Night” for the series’ second season, which aired on July 25, 2009.[2]

The duo’s debut album, The Life of a Song, was released on October 28, 2008 on Sugar Hill Records.[3] The album debuted at No. 10 on the Billboard Top Country Albums chart, and No. 61 on the all-genreBillboard 200. Its lead-off single, “Cheater, Cheater“, was originally recorded by the duo Bomshel. Kristy Osmonson, one-half of that duo, co-wrote the song with the Feeks and Wynn Varble. Bomshel’s version was released as a single in early 2008, although it did not chart. Joey + Rory’s version was released in September 2008, featuring a music video that included a cameo from Naomi Judd, who had been a judge on Can You Duet.[4] Joey + Rory’s version peaked at No. 30 on the country music charts in early 2009. The duo has also appeared in television commercials for the online retailer Overstock.com.[5] In February 2009, the duo was nominated for the Academy of Country Music Awards Top Vocal Duo.[6] Although a cover of Lynyrd Skynyrd‘s “Free Bird” was originally to have been released as the second single, it was withdrawn after two weeks, and replaced in March 2009 with “Play the Song”, which failed to chart. The album’s third single, “To Say Goodbye”, was released to radio on July 27, 2009, and also failed to chart.

Joey + Rory released their first holiday single, the Carl Jackson-produced “It’s Christmas Time,” on November 16, 2009 to country radio and November 24, 2009 to digital retailers.[7] The single was released in partnership with CMT One Country, which donated a portion of proceeds from the single to various charities (including The Second Harvest Food Bank of Middle Tennessee).[7] Additionally, Rory Feek, along with Tim Johnson, created the Song Trust, under which an album of Christmas songs performed by children, titled Merry Kidsmas, was released.[8]

Joey + Rory announced on October 15, 2009, that they were in the studio working on the follow-up album to The Life of a Song. The album, titled Album Number Two, was announced in January 2010 and released on September 14, 2010. The lead-off single, “This Song’s for You“, was released to radio in July 2010; originally “That’s Important to Me” had been chosen, but the single choice was changed. The music video for “This Song’s for You” was directed by Darren Doane and was released in August 2010. “That’s Important to Me” was released as the album’s second single in October 2010. It debuted at number 58 on the Hot Country Songs chart for the week ending February 12, 2011.

On March 16, 2010, it was announced that the duo were the winners of the 2010 Academy of Country Music Award for Top New Vocal Duo, and would compete alongsideLuke Bryan and Gloriana for the Top New Artist award.[9] Joey + Rory performed new songs from their upcoming album, were interviewed, and received their award on theGAC special “ACM Top New Artists” on April 1, 2010.[9]

Joey + Rory’s third studio album, His and Hers, was released on July 31, 2012. “When I’m Gone” and “Josephine” served as the album’s first two singles and were simultaneously released to radio before the album,[11] though neither charted. In late 2015, due to a spike in sales for “When I’m Gone” after the video was featured in some press about Joey + Rory, it managed to enter the Billboard Hot Country Songs chart at number 21.

Joey + Rory announced on the red carpet of the ACM Awards that the duo had recorded their first album of gospel music. Joey Martin told Billboard that “It’s kind of an inspirational album, of old gospel songs that I grew up singing and listening to my mom sing…. It’s an album I’ve wanted to do for a long, long time.”[12] The album, Inspired: Songs of Faith & Family, was released on July 16, 2013 via Gaither Music Group. It debuted at number 166 on the Billboard 200 with first-week sales of 3,000, while also peaking at number 31 on the Top Country Albums chart and at number 6 on the Top Christian Albums chart.[13]

After the release of their Gospel album, Joey + Rory announced that they would be releasing their fifth studio album, Made to Last, in late 2013 via their own Farmhouse Recordings record label (their first self-released project). Made to Last was released on October 8, 2013 and debuted at No. 44 on the Top Country Albums chart. Their sixth studio album, Country Classics: A Tapestry of Our Musical Heritage, was released exclusively to Cracker Barrel in May 2014, with a wide release following on October 14, 2014. Their second project on Gaither Music Group, the record consists of cover versions of classic country songs.[14]In October 2015, after Joey’s terminal cancer diagnosis, the duo cancelled all future concert appearances.

Hymns That Are Important to Us, the duo’s seventh and final studio album, was released on February 12, 2016 via Gaither Music Group.[15] The set, which was a “dream project” for Joey Feek, consists of twelve covers of Christian hymns, plus a reprise of “When I’m Gone,” which was first featured on the duo’s His and Hers album in 2012. Some proceeds of the album’s deluxe edition will go towards the Loeys-Dietz Syndrome Foundation, a charity selected by Joey Feek in honor of her daughter’s friend who has Loeys-Dietz syndrome. Hymns That Are Important to Us debuted at the top of the Billboard Top Country Albums andTop Christian Albums charts, with first week sales of 68,000 copies, making it their highest-charting release and the duo’s best sales week ever.[16] On March 4, 2016, Joey Feek died as a result of cervical cancer at the age of 40.[17]

In June 2014, Joey was diagnosed with cervical cancer not long after the birth of the couple’s daughter, Indiana, who was born with Down syndrome.[18] In 2015, Joey announced that the cancer had returned and spread to her colon.[19] That October, Rory revealed in a blog post that Joey’s cancer was terminal, and they were stopping all treatment.[20] On November 9, 2015, Rory announced via his blog THISLIFEILIVE that Joey has entered hospice care.[21] In November 2015, she began receiving in-house, end-of-life hospice palliative care at her home in Alexandria, Indiana. In a November 2015 interview with The Tennessean, Joey stated that she was not angry or depressed with God but was disappointed, that after undergoing radical gynecological surgery to eradicate it, the cancer had returned as inoperable and terminal. In the newspaper article, Joey said she hopes to die peacefully in her sleep, to live to see Christmas of 2015 and, if possible, her daughter’s second birthday in February 2016, which she achieved.

Her husband, Rory, has kept a blog of their experience, and the couple has maintained a positive attitude and demeanor in recent weeks and months.[22][23][24][25][26] However, in January 2016, Mr. Feek, in a sad but grateful blog post, titled “When I’m Gone”, revealed that, following an emotional talk with Joey, and reflecting that they had been able to spend Christmas and the New Year with their family and friends, said that, as opposed to before when they were still more optimistic, they both had come to terms with and accepted her terminal diagnosis and worsening health (her morphine dose needed to keep the cancer pain under control had quadrupled in the prior four days before the post), and let nature to take its course.[27] She was able to celebrate her daughter Indiana’s second birthday and Valentine’s Day with her husband Rory and her daughter, and was later able to help make a meal for the three on her bed, though she is now confined to her bed, and is showing the effects of terminal cancer (weight, body mass, and hair loss).[28] In early March, after saying her goodbyes to her family and relatives, she fell into a deep sleep from which she was not expected to recover or awaken, showing signs of organ dysfunction and shutdown due to the cancer, according to her husband Rory and the attending hospice nurse. Rory was able to post a goodbye tribute video, but since then has understandably been at his wife’s side as she enters her last few days. He had found a type of closure, because they had said goodbye, her pain levels had been increasing prior to that point, and the couple had reached every milestone that they had realistically set- Christmas and the New Year, Valentine’s Day, the Grammys, and Indiana’s birthday.[29][30][31] Joey died with her husband at her side at 2:30pm on March 4, 2016.[32]

List of Joey + Rory’s performances on Can You Duet [show]