I recently recorded a solo for my friend Paco Ventura. The song is called Tu Vida featuring Stu Hamm on bass, Tini Fernandez on drums and my former bandmate Jimmy Waldo from Graham Bonnet on keys. Solo starts at 2:30. Paco is an amazing guitarist/songwriter. Check out his new CD Madre Tierra!

Just finished the watching “Blood Frets and Tears”. Big shout out to Producer/Director Andrew Klein for putting out a great documentary on history of electric guitars!

Check out “Blood, Frets and Tears” a documentary out on Amazon (free with Prime). It’s a documentary on the history of Rock, Metal and electric guitars. Joey Tafolla is in it along with George Lynch, Lita Ford, Paul Gilbert…and many more!

HEY EVERYONE – AUGUST SHOW DATES WITH QUIET RIOT – COME OUT AND BANG YOUR HEAD!!! 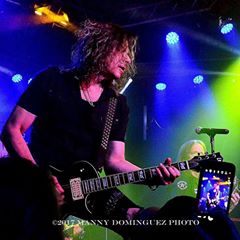 Back in the studio with a new project! “OF GODS AND MONSTERS” Featuring: Kevin Goocher/Vocals (Omen), Tim Gaines/Bass (Stryper) and one of my fav drummers on the planet – Deen Castronovo on drums (Dead Daisies, Journey, Ozzy). Drums are done! Starting guitar tracks after 1 more cup of coffee and a Monster energy drink! Look for this release later this year! Photo: Jenny Dinh #Heavyashell