Let us introduce you to John Altman highly accomplished jazzman musician, Bafta Awards jury which bio and social medias are below 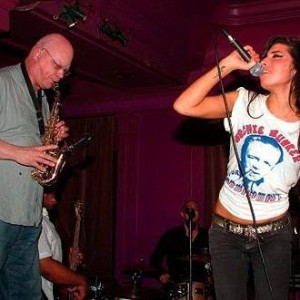 composer and producer between the UK and LA, and highly accomplished jazz musician.
Wikipedia bio : https://en.wikipedia.org/wiki/John_Altman_(composer)

John Altman began his musical career at age 3 with Judy Garland at the London Palladium! Commencing his recording and live career as an in-demand saxophonist in the late 60s he has performed with all the major figures in music over the last few decades, including Eric Clapton, Sting, Phil Collins (all of whom performed in his band, the Secret Police, an all star aggregation specially assembled for the Secret Policeman’s Ball), Jimi Hendrix, Fleetwood Mac (with whom he made his first record) Nick Drake, Muddy Waters, Bob Marley, Jimmy Page, Little  Richard, Prince, and Van Morrison and Hot Chocolate (for both of whom he  functioned as musical director) and many more. He has recently contributed saxophone solos for the new albums by Jerry Jemmott (all star tribute to King Curtis), Rick Astley, Chuck D, the Brand New Heavies, and Goldie.

Beginning in the mid 70s he found great success as an arranger/conductor. Among his hit records have been Aled Jones Walking in the Air (which he also produced); Alison Moyet’s That Ole Devil Called Love, Simple Minds Streetfighting Years, Rod Stewart’s Downtown Train, George Michael’s Kissing a Fool, Prefab Sprout’s Hey Manhattan, Tina Turner and Barry White’s Wildest Dream, Diana Ross’ Christmas Album, Bjork’s It’s Oh So Quiet, Goldie’s Saturnz Returns, album tracks for Tom Jones, the Pretenders, Ian Dury, Graham Parker and Murray Head, and perhaps his most famous arrangement of a song he helped create with Eric Idle, Monty Python’s Always Look on the Bright Side of Life, voted the greatest comedy song in movies by the viewers of Channel 4 in the UK . His association with Python also produced the cult classic The Rutles, and three series of the Innes Book of Records, as well as many onstage appearances, the most recent at their 40th Anniversary Reunion Concert when he appeared as a Mountie performing the Lumberjack Song with the whole crew! He is also a frequent guest conductor for the Royal Philharmonic Orchestra, and serves on the board of ASMAC (the American Society of Music Arrangers and Composers), and as a member of the governing Council of the British Academy of Film and Television Arts (BAFTA). Recent record arrangements include the Amnesty International 50th anniversary celebrations CD, Chimes of Freedom – one featuring the late Pete Seeger in his last recording with banjo virtuoso Bela Fleck, and the other a jazz track featuring Evan Rachel Wood with Patrice Rushen and Tom Scott. He was flattered to have been recommended for this prestigious gig by Sir George Martin. For the recent Sir Michael Caine Gala, John arranged three songs for Quincy Jones, Joss Stone and the London Symphony Orchestra and also performed as saxophone soloist. He wrote the brass arrangement for the end title song (Johanna) written and produced by Mark Ronson for the new Johnny Depp movie Mordetcai. John’s new band, Pearls of Wisdom, co led with Police guitarist Andy Summers recently debuted in Shanghai with a world tour to follow.

He has had a parallel successful career as a composer/arranger/producer for films and television, winning most of the prestigious film composer awards -an EMMY and an ASCAP Film Award for RKO 281 – The Making of Citizen Kane, the Anthony Asquith Award (BAFTA) for Hear My Song, a second ASCAP Award and the Choreographer’s Carnival Award for best dance score for Shall We Dance, a TRIC Award for Peak Practice, a Golden Reel nomination for Little Voice, a BAFTA nomination for The Old Devils,  an Oscar mention for the period music for Titanic, which he also produced, and a second Emmy nomination in 2003 for his score for The Roman Spring of Mrs Stone starring Helen Mirren and Ann Bancroft. His contribution to British and international film music has been recognized in October 2006 by the award of the prestigious Gold Badge of Excellence, the lifetime achievement award of the British Academy of Composers and Songwriters, in 2011 with a Lifetime Achievement Award at the Monaco Film Festival, and in 2012 with an Honorary Doctorate of Music from the University of Sussex  where he was the first ever Creative Arts Fellow in the Department of Humanities, a position he held through 2010. He is Patron of the ISTA Arts Academy based in Shanghai and has a recital room there named in his honour.

Other films include the critically acclaimed Funny Bones, Bhaji on the Beach, Legionnaire, Bad Behaviour, Beautiful Thing, The Matchmaker, Fidel, King of Texas, Beautiful Joe, Hope Springs, and On Thin Ice produced by and starring Diane Keaton as well as the classic tank chase sequence in Goldeneye, voted number 2 in the all time James Bond favourite moments list by the viewers of Channel 4. He was the first Western composer ever to score a Russian movie (in 1991) and the first Western composer to score a Malayalam movie in 2009. His score for the Hallmark miniseries The Lost Empire from 2000 has become a cult classic and was released in December 2014. (He also arranged and conducted many classic movie scores for other composers including the Golden Globe winning score for The Sheltering Sky,Luc Besson’s Leon (The Professional) and on television, the highly popular Miss Marple series for the BBC.). Among the composers for whom John served as orchestrator/conductor are Ryuchi Sakamoto, Elmer Bernstein, Eric Serra and Mark Isham.

John’s recent scoring projects include esteemed Indian director K P Kumeran’s modern day setting in Malayalam of Ibsen’s Master Builder, Castles In The Air, filmed in the UK and starring Kerala’s finest classical actor Mohan Lal, and the late Jag Mundhra’s thriller Shoot On Sight filmed in London with Brian Cox and Greta Scaachi. Also recently on air was a 90 minute comedy drama for Granada TV, The Good Samaritan, starring Shane Ritchie. His most recent Hollywood credits are the top 5 worldwide hit movie Shall We Dance, starring Jennifer Lopez, Richard Gere and Susan Sarandon for Miramax,  the music for the CBS movie Suburban Madness with Sela Ward, and the controversial Emmy nominated miniseries, The Reagans starring Judy Davis and James Brolin . In the UK he scored Mr Harvey Lights a Candle for BBC Films, and the BAFTA nominated The Queen’s Sister for Channel 4, and collaborated with Sir Ridley Scott on a 7 minute film for Prada.  He has also become a guest presenter on the BBC Television Culture Show and Channel 4s The Music of James Bond, and was seen extensively in the BBC4 documentary How Pop Songs Work, as well as frequent radio appearances as guest presenter of various jazz shows. A recent TV project was as musical director for the BBC TV ‘celebration’ of the centenary of Titanic with Joss Stone, Bryan Ferry, Nicola Benedetti and many more. He also wrote the sleeve notes for the album he produced of unreleased material for a double and quadruple CD special edition box set of music from the James Cameron movie Titanic, which was issued at the time of the release of Titanic 3D, in April 2012.

Along the way he has found time to be the most prolific writer of music for commercials, having scored over 4,000 worldwide, winning every major creative award, including the inaugural MPA Music in Advertising Award, and being named by Campaign magazine in 2002 as one of the 100 most influential figures in contemporary British advertising, and in 2005 as one of the 5 top composers. His music for Levis and Renault won the Campaign Award for Best sound tracks in 2003 and 2004. His recent composition for the advertising campaign for Sheila’s Wheels car insurance has swept the country, and the Sheila’s Wheels theme is now the most downloaded ringtone in the UK. Among his collaborators in advertising have been such giants as David Bailey, Terence Donovan, John Frankenheimer, Ridley and Tony Scott, and Sir Salman Rushdie. He is also a prolific composer of library music. with his work being featured worldwide in movies and on television.

For the London stage, John is currently involved as musical arranger and supervisor for the forthcoming West End production of Feelin’ In The Mood – a new musical about Glenn Miller. He is working on a musical adaptation of Crime and Punishment for the Moscow stage with acclaimed director Andre Konchalovsky, and also contributed songs for a stage musical devised by Terence Frisby from his best selling book Kisses On A Postcard. He was also co-founder – and co-host  for seven years –  of London’s famous 10 Room Monday night jam session which won several Club Night of the Year awards, and featured guests of the calibre of Pharell, Joss Stone, Lionel Richie, Macy Gray, Black Eyed Peas, Alicia Keys, Najee, Wycliff, Shaq O’Neill, Jah Rule, the Roots, The Neptunes, R Kelly , John Legend, Mario, Roy Ayers, Omar, Chaka Khan, Will Smith, Chris Tucker and the Back Street Boys, as well as helping to launch the careers of Katie Melua, Jessie J, and the late Amy Winehouse, who was a regular 10 Room habitué and performer.  Two new venues in London have recently begun to host the weekly sessions with guests including Prince and the New Power Generation, and others are to be added worldwide.

John is also a highly accomplished jazz musician, lauded by allaboutjazz.com as “a world class saxophonist” and by respected critic Don Heckman in the LA Times as “one of the few film composers with authentic jazz skills.” On the jazz scene he has performed with Chet Baker, Plas Johnson, Ernie Watts, Red Holloway, Conte Candoli, Slim Gaillard, Barbara Morrison, Herb Geller, Wild Bill Davison, Bud Freeman, Les McCann, Percy Heath and many others. He conducted the Stan Tracey Big Band and the Durham Cathedral Choir for an album of Duke Ellington’s Sacred Music. He also leads a highly successful big band, heard on many of the above records and soundtracks. John also undertook a well received big band tour of Australia, and a quintet tour of California. His jazz quartet CD You Started Something was released on the Bronze Jazz Label, and was Jazz CD of the month in the prestigious Observer newspaper, as was his previous CD featuring his orchestra with jazz singer Joan Viskant. Recent playing appearances have included the Vail Jazz Festival, the Vladivostok Summer Festival, the San Jose winter jazz series, the LA Jazz Festival, the Shanghai Jazz Festival , the Hollywood and Highland Summer Jazz Series in Los Angeles and the London Jazz Festival both with the big band, which garnered a standing ovation and rave reviews, and the Caribbean Jazz Cruise, on which he recently returned for a sixth successive year. John is also a Patron of the National Jazz Archive and was honoured by the Archive in July 2010. He recently recorded the big band for an album release in 2015

His all star US big band has included such jazz luminaries as Gary Foster, Warren Luening, Pete Christlieb, Peter Erskine, Alex Acuna, Tom Ranier and Andy Martin and featured in the Swingin’ Affair Big Band Festival in Los Angeles in May 2009, the prestigious Los Angeles County Museum of Art summer jazz series in November 2010, and featured in the Big Band Olympics in LA in May 2011 and the Modern Sounds Festival in October 2011, 2012, 2013 and 2014