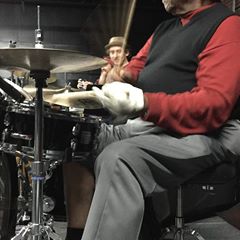 Starks played on many of Brown’s biggest hits, either as the sole drummer or in tandem with Clyde Stubblefield, including “The Payback“, “Sex Machine“, “Super Bad“, and “Talkin’ Loud and Sayin’ Nothing“. He also backed many of the artists produced or managed by Brown, most notably Lyn Collins, The J.B.’s, and Bobby Byrd.[2] Along with his colleague Stubblefield, Starks ranks as one of the most sampled drummers on contemporary hip hop and R&Brecordings.[3]

In his long career, Starks played with a number of major figures of the blues, including Bobby Bland and B.B. King. Starks appeared on some of Bland’s most successful records, among them “I Pity the Fool” (1961), “Turn On Your Love Light” and “Stormy Monday Blues“. With Stubblefield, he recorded an instructional video.[4]

Starks lived in Mobile, Alabama and performed in Grayton Beach, Florida. When not touring or recording, he performed five nights a week at the Picolo Restaurant and Red Bar, a local restaurant.[2]

ROGER DALTREY " The Who " concerts