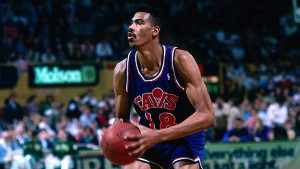 Williams was born in Sorrento, Louisiana; a small town near Baton Rouge. He got the nickname “Hot Rod” as a baby due to his habit of making engine-like noises as he scooted backwards across the floor.

A 6’11” power forward/center, he played collegiately at Tulane University, leaving as that school’s second all-time leading scorer. His tenure at Tulane was somewhat checkered, however. According to a Tulane booster club president, Williams was nearly kicked off the team in his sophomore year “for missing practices and for being unreliable”. Additionally, he was a marginal student at best. He barely maintained a C average in high school, and had barely passed theSAT. At Tulane, his grade point average hovered in the C-D range despite a schedule laden with “decidedly non-academic” courses such as driver’s education and weight training.[1]

On March 27, 1985, Williams was arrested for suspicion of point shaving. According to the indictment, Williams had taken at least $8,550 from Gary Kranz for influencing point spreads in games against Southern Miss, Memphis State and Virginia Tech. Williams was charged with sports bribery and conspiracy;[2] his first trial ended with a mistrial, but during his second trial a jury found him not guilty of all five counts.[3]

Williams was selected by the Cleveland Cavaliers in the 1985 NBA draft with the 21st pick of the second round (45th overall). However, due to the trial, Williams spent the 1985–86 season playing for the United States Basketball League. Able to play for the Cavs the next year, Williams was named to the NBA all-rookie team for the 1986-87 season, along with teammates Ron Harper and Brad Daugherty. Perhaps Williams’ finest season occurred in 1989, when he averaged 16.8 points, 8.1 rebounds and 2.04 blocked shots per game while mostly serving as the team’s sixth man. Prior March 22, 2009, he ranked as the Cavaliers’ all time leader in blocked shots (1,200) (surpassed by Žydrūnas Ilgauskas).[4]

Williams spent nine seasons with the Cavs before being traded to the Phoenix Suns for Dan Majerle.

He finished out his career with the Dallas Mavericks.