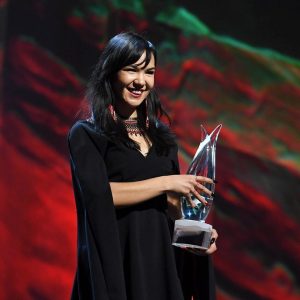 Originally from Sanikiluaq,[4] Nunavut, in Canada, she was educated at Nunavut Sivuniksavut in Ottawa before completing an indigenous studies program at Nicola Valley Institute of Technology in British Columbia.[5] She first attracted widespread attention in 2013 with a series of Inuktitut-language covers of pop songs, most notably Rihanna‘s “Diamonds“, on YouTube.[6]

Sedna was released on February 25, 2017, by Nunavut‘s Hitmakerz record label.[8][5] The title of the album, known as ᓄᓕᐊᔪᒃ (Nuliaju) in Inuktitut, refers to the story of Sedna, the Inuit goddess of the sea, which Fraser decided to modernize in this album.[6] She said, “The goal of the album is to help heal those suffering from the effects of colonization, including the damaging effects of residential school and forced relocation. There is a great need for Inuit artists to directly speak to those affected from the past.”[8]