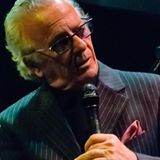 Vancouver jazz singer Kenny Colman has passed away at the age 85.

Colman made his name in show business in the 1960s after his voice captured the attention of luminaries such as Sarah Vaughn and Frank Sinatra.

He was still performing as recently as May of this year.

“He was just amazing,” said documentarian Roger Larry, who was in attendance for one of Colman’s final performances.

“He was in late stage Parkinson’s, he’s 85 years old, and he just wowed a packed house.”