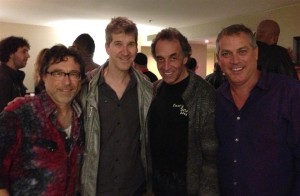 Kim Plainfield, drummer, originally from the San Francisco Bay Area, has been based in New York since 1977.  He has accumulated numerous performance and recording credits during his professional career, which he started in earnest at the age of 19 when he began playing with Mingo Lewis and subsequently secured the drum chair with the Pointer Sisters.

Some three years later, at the age of 22, Kim moved to New York City where Kenwood Dennard introduced him to the Drummers Collective.  This is where Kim’s pedagogical career took hold.  He then started playing with Bill Connors, the world-renowned guitarist from Chick Corea’s original Electric Band, and Didier Lockwood, the unparalleled French jazz violinist. Recordings, where Kim participated, that deserve mention are “Double Up” and “Assembler” by Bill Connors and “Live At The Olympia” by Didier Lockwood.  All three recording are considered icons of contemporary fusion music. Worldwide, Kim is one of the first addresses when looking for modern drumming.  His unbelievable technical abilities and versatile musicality bring audiences to enthusiastic amazement. He is a drummer of true and deep and organic musicality.

Kim embarked on a solo career in 1993 and has since been touring Europe as a leader, at least twice a year, to ever increasing audiences and superb press reviews. His groups have included world class musicians such as Lincoln Goines, Bill O’Connell, Didier Lockwood, Mark Soskin and Tom Kennedy.