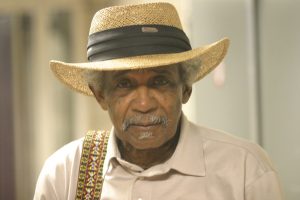 Best known for regional hits recorded with Ernie Young’s Nashville-based Excello Records, Lester also contributed to songs recorded by other Excello artists, including Slim Harpo, Lightnin’ Slim, and Katie Webster. Cover versions of his songs have been recorded by (among others) the Kinks, the Flamin’ Groovies, Freddy Fender, Dwight Yoakam, Dave Edmunds, Raful Neal, Anson Funderburgh, and the Fabulous Thunderbirds. In the comeback stage of his career (since the late 1980s) he recorded new albums backed by Mike Buck, Sue Foley, Gene Taylor, Kenny Neal, Lucky Peterson, and Jimmie Vaughan.

In the mid-1950s, Lester was on the margins of the Louisiana bluesscene. According to Rolling Stone (February 23, 2006), Buddy Guy, before moving to Chicago, had played in Louisiana “with some of the old masters: Lightnin’ Hopkins, Lazy Lester, Slim Harpo.” When Guy left for Chicago, in 1957, Lester replaced him, on guitar, in a local band—even though Lester, at the time, did not own one.

Lester’s career took off when he found a seat next to Lightnin’ Slim on a bus transporting Slim to an Excello recording session. At the studio, the scheduled harmonica player did not appear. Slim and Lester spent the afternoon unsuccessfully trying to find him, when Lester volunteered that he could play the harmonica. Lester’s work on that first Lightnin’ Slim session led the producer, Jay Miller, to record Lester as solo artist and also to use him as a multi-instrumentalist on percussion, guitar, bass, and harmonica in sessions headlined by other artists whose recorings were produced by Miller, including, notably, Slim Harpo. “Percussion” on these sessions went beyond the traditional drum kit and included a rolled-up newspaper striking a cardboard box.[1] Miller dubbed Lester “Lazy Lester” because of his laconic, laid-back style.[1]

More than his vocal delivery, Lester is best remembered for songs that were later covered by a wide range of rock, country, blues, and Tex-Mex stars, chiefly, “I’m a Lover Not a Fighter,” “I Hear You Knockin’,” and “Sugar Coated Love.”

Lester stated that he wrote these songs, but almost all are credited to Miller or to Lester and Miller. Lester also stated he received few royalties, which embittered him and made him skeptical of the music industry. By the late 1960s, he had given up on the music industry, working manual labor and pursuing his favorite hobby—fishing. Lester moved to Pontiac, Michigan, living with Slim Harpo’s sister.

In 1971, Fred Reif set up a Lightnin’ Slim concert at the University of Chicago Folk Festival, and Lester was brought up from Louisiana to accompany him. A few weeks after that performance, Lester was back in Louisiana. Years later Reif and Lester were both in Michigan, from where Reif orchestrated a comeback. Lester recorded and played around the United States and abroad, backed by blues bands, including, frequently, Loaded Dice.

Lester’s recordings in this period were on blues labels Alligator and Telarc, alongside releases in Europe.

If disenchanted, Lester retained his harmonica, guitar, and vocal talents (the songwriting that had been muse to the Kinks and Dwight Yoakam having dried up long before). In September 2002, he was presented with a Lifetime Achievement Award by the Boston Blues Society.[citation needed]

In 2003, Martin Scorsese included Lester in his blues tribute concert at Radio City Music Hall, a record of which was released as the film and album Lightning in a Bottle. The group photograph inside the album depicted Lester grinning, dead-center among peers and musical progeny including B.B. King, Solomon Burke, Clarence “Gatemouth” Brown, Buddy Guy, Levon Helm, Chuck D, the Neville Brothers, Dr. John, John Fogerty, and Aerosmith.

In 2012, Lester teamed up with British Blues Woman Dani Wilde to play a special double headline concert as part of Gloucester Rhythm and Blues Festival.[5]

Lester appeared and performed in a television commercial aired nationally for Geico Insurance in 2018.[6]

Lester lived in Paradise, California, with his girlfriend.[7] He appeared in the 2015 documentary film I Am the Blues.[8]