Wayne Shorter’s New Album Is ‘Without a Net’

Wayne Shorter’s forthcoming jazz album, “Without a Net,” is highly anticipated and comes at a time when this 79-year-old saxophonist and composer, along with his band, seems as driven as ever. 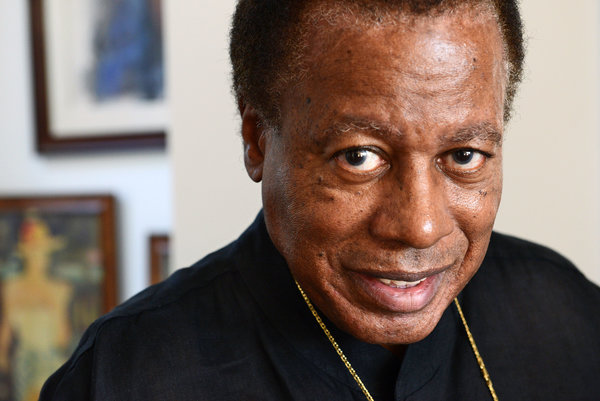 THE STANDARD LINE on Wayne Shorter is that he’s the greatest living composer in jazz, and one of its greatest saxophonists. He would like you to forget all of that. Not the music, or his relationship to it, but rather the whole notion of pre-eminence, with its granite countenance and fixed coordinates. “We have to beware the trapdoors of the self,” he said recently.

Follow@nytimesarts for arts and entertainment news.

A sortable calendar of noteworthy cultural events in the New York region, selected by Times critics.

Wayne Shorter at a festival in January.

The Wayne Shorter Quartet, with Danilo Pérez on piano, Mr. Shorter on saxophone, John Patitucci on bass and Brian Blade on drums, performing at Lincoln Center.

“You think you’re the only one that has a mission,” he went on, “and your mission is so unique, and you expound this missionary process over and over again with something you call a vocabulary, which in itself becomes old and decrepit.” He laughed sharply.

Mr. Shorter will turn 80 this year. Decrepitude hasn’t had a chance to catch up to him. Last week he appeared at Carnegie Hall as a featured guest with the Orpheus Chamber Orchestra, which played several of his compositions. On Tuesday “Without a Net,” easily the year’s most anticipated jazz album, will become his first release on Blue Note in more than four decades. And next Saturday he’ll be at the Walt Disney Concert Hall with the Los Angeles Philharmonic for the premiere of “Gaia,” which he wrote as a showcase for the bassist and singer Esperanza Spalding.

He hasn’t accrued this late-inning momentum alone. The vehicle for most of Mr. Shorter’s recent activity, including the orchestral work, is his superlative quartet with Danilo Pérez on piano, John Patitucci on bass and Brian Blade on drums. A band of spellbinding intuition, with an absolute commitment to the spirit of discovery, it has had an incalculable influence on the practice of jazz in the 21st century — and not necessarily for the same reasons that established Mr. Shorter’s legend in the 20th.

Since the emergence of the quartet, which released its first album on Verve in 2002, jazz’s aesthetic center has moved perceptibly: away from the hotshot soloist and toward a more collectivist, band-driven ideal. There has also been an unusual amount of dialogue between jazz’s tradition-minded base camp and its expeditionary outposts, where conventions exist to be challenged.

Mr. Shorter’s working band is far from the only one to embody these principles during the past decade, but it has been the most acclaimed and widely heard. Traces of its style can be detected in other groups, including those led by the saxophonist Chris Potter and the trumpeter Ambrose Akinmusire. Its slippery methodology has also taken root in the conservatory, and not just at the Berklee College of Music, where Mr. Pérez is on the faculty, or at the Thelonious Monk Institute of Jazz, where Mr. Shorter is a resident guru.

“The students are very familiar with that quartet,” said Doug Weiss, who teaches a popular Wayne Shorter ensemble class at the New School for Jazz and Contemporary Music. “They come in having heard the way that band plays together, and a lot of them have no idea what’s going on, and that’s why they’re there.”

So in addition to Mr. Shorter’s body of work — his terse and insinuative compositions, which have been closely studied by jazz musicians for decades — this newer generation has also had the opportunity to grapple with his elusive philosophy of play.

Once, in an interview, Mr. Shorter was asked to account for his pursuit of music above other art forms. He replied that music has an inherent sense of velocity and mystery. It would be hard to find a more concise distillation of his priorities as a bandleader.

“When we go out onstage we always start from nothing,” said Mr. Patitucci by phone from Mr. Pérez’s native Panama, where the quartet headlined a jazz festival last month. “So anybody can spin the wheels in a certain direction, and then we develop those themes.”

What follows isn’t free jazz, exactly, though it uses some of the same tools. “It’s spontaneous composition,” Mr. Patitucci said, “with counterpoint and harmony and lyricism. All of those values are still there. It’s just being pressurized into milliseconds.”

Mr. Shorter framed the idea as an image: “We don’t count how much water there is in a wave when we see the ocean.” He was on the couch of a hotel suite overlooking Central Park South, during one of his recent visits from Los Angeles, where he lives. That evening he would perform at a gala for the David Lynch Foundation, along with the pianist Herbie Hancock, his former partner in the Miles Davis Quintet. He wore dress loafers and a fleece pullover embroidered with the logo of Soka Gakkai International, the Nichiren Buddhist organization to which he and Mr. Hancock belong.

A scheduled interview began with an unscheduled interruption: Ms. Spalding — who won the Grammy for best new artist in 2011, and was also booked at the gala — dropped by with the Argentine pianist Leo Genovese. For all of her success Ms. Spalding still belongs to the demographic that grew up with the notion of Wayne as sage: she and Mr. Genovese were there simply to give him a hug.

Mr. Shorter is a notoriously elliptical conversationalist, prone to cosmic digression and quick-fire allusion. During a spirited two-hour interview he touched on modern art, social politics and science fiction — among the books he produced for inspection was the dystopian “Ready Player One” by Ernest Cline — as well as music and movies, and movie music. “I’m looking at a lot of old silent films now,” he said, “and I listen to the new, hip boy bands. I was checking out some Selena Gomez.” On the subject of jazz, he said pithily, “The word ‘jazz’ to me only means ‘I dare you.’ ”

But he also painted his own jazz narrative in precise strokes, whether it was hearing Charlie Parker at Birdland at the age of 18 — what stuck with him was a quotation of “Petrushka,” the Stravinsky ballet, that Parker sneaked into one solo — or sensing the mortal urgency that burned in John Coltrane, his fellow saxophonist, and in some ways a mentor. And Mr. Shorter made several references to the cryptic wisdom of Miles Davis, slipping each time into an unusually convincing imitation of that trumpeter’s throaty rasp.

Davis’s celebrated quintet of the mid-’60s was one of the most aerodynamically advanced in the history of jazz, and apart from Davis himself Mr. Shorter was its chief in-house designer. One of his signature contributions was “Nefertiti,” a slithery 16-bar tune ambiguously shaded with altered and half-diminished chords.

On record, as the title track to a 1968 album, the song features Davis and Mr. Shorter tracing and retracing its melody while the rhythm section improvises in the background, with all the supple intrigue of a shadow creeping across the landscape. It’s a useful precedent for Mr. Shorter’s current band, which derives much of its dynamism from rhythm-section cohesion within the loosest possible framework.

Another precedent, less obvious, is the transitional band that Davis led before his swerve into jazz-funk, a quintet with Mr. Shorter, the pianist Chick Corea, the bassist Dave Holland and the drummer Jack DeJohnette. A boxed set released last week on Columbia/Legacy, “Live in Europe 1969: The Bootleg Series Vol. 2,” illuminates just how much liberty that group took with its materials, even to the point of feverish abstraction. It never sounds freer than on a concert in Stockholm, attacking three of Mr. Shorter’s compositions: “Paraphernalia,” “Nefertiti” and “Masqualero.”

Two of those have surfaced on Mr. Shorter’s recent albums with the quartet, along with other pieces from a broad swath of his career. “Without a Net,” a compilation of live recordings from 2011, opens with “Orbits,” a theme from the Davis quintet era. It also includes a majestic take on “Plaza Real,” from the songbook of Weather Report, the epochal ’70s fusion band that Mr. Shorter led with Joe Zawinul.

But the provenance of the music takes a back seat to its process, which Mr. Shorter said was meant to herald an ideal of self-actualized communal leadership. “This kind of stuff I’m talking about is a challenge to play onstage,” he allowed, and chuckled. “When Miles would hear someone talking about something philosophical, he would say” — here came the rasp — “ ‘Well, why don’t you go out there and play that?’ One thing we talk about is that to ‘play that’ we have to maybe play music that doesn’t sound like music.”

If that sounds like a Zen riddle, comfort yourself with the knowledge that even Mr. Shorter’s band mates have had to warm to the uncertainty. “It was scary, to be honest,” Mr. Pérez said of his early experience in the quartet. “It was a shock to put myself into a situation where I had no idea what was happening. Even when I listened back, I felt like an outsider: ‘What is that? What key are we in?’ ” He gradually made adjustments, including one to his practice regimen: for two or three hours at a stretch he would watch Tom and Jerry cartoons with the sound muted, making up a score.

The band hasn’t relaxed its pursuit of revelation, which expresses itself in myriad ways: Mr. Pérez’s on-the-fly cadenzas, the unexpected thunderclap of Mr. Blade’s crash cymbal, the dartlike insistence of Mr. Shorter’s improvisational flights. All this remains true even as Mr. Shorter steps up his output as a composer. “He’ll bring in this 10-page piece of music, and it’s gorgeous,” Mr. Patitucci said. “And he’ll say, ‘Just this 16 bars.’ He’s not even attached to what he wrote.”

The center of gravity on “Without a Net” is “Pegasus,” designed to feature Imani Winds, a classical wind ensemble. Through much of that track’s 23 minutes, the woodwinds deftly frame the dramatic fluctuations of Mr. Shorter’s band; at times the two factions achieve a compelling synthesis, advancing a dramatic theme.

It’s horizon-scanning music, but it also features glimpses of the past, like the fanfare from “Witch Hunt,” which led off Mr. Shorter’s landmark 1965 Blue Note album “Speak No Evil.” During his solo in “Pegasus” Mr. Shorter also nods to the old Sonny Rollins tune “Oleo.” Elsewhere on the new album he drops a quotation of the Afro-Cuban bebop standard “Manteca,” and leads the band through a cubist recasting of “Flying Down to Rio,” a movie theme originally sung by Fred Astaire.

“To me there’s no such thing as beginning or end,” Mr. Shorter said. “I always say don’t discard the past completely because you have to bring with you the most valuable elements of experience, to be sort of like a flashlight. A flashlight into the unknown.”

A version of this article appeared in print on February 3, 2013, on page AR9 of the New York edition with the headline: Major Jazz Eminence, Little Grise.