<3
(15 July 1951 – 25 October 2010)
October 25/2010 is the day the world lost a great reggae icon, Gregory Isaacs ,was one of reggae music’s most popular singers. Known as the Cool Ruler for his exceptionally suave and emotive voice, Isaacs scored many hits during the 1970s and 80s, including the perennial favourite Night Nurse, and remained active as a recording artist, live performer and producer in the decades that followed. Although best known for romantic ballads, delivered with a hint of vulnerability, he also excelled at songs of social protest and work that expressed unwavering pride in his African heritage.
Mr Isaacs fought a long battle against lung cancer which he eventually lost on October 25, 2013. Isaacs died at his home in south London. On November 20 a big memorial service was held at Kingston’s National Indoor Sports Centre, including tributes from artistes including Lloyd Parks and We the People Band, Ken Boothe, Freddie McGregor, Shaggy, Judy Mowatt, Mavado, The Tamlins and Bongo Herman, before his remains were entombed at the Dovecot Cemetery. 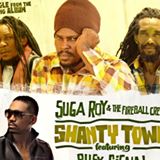