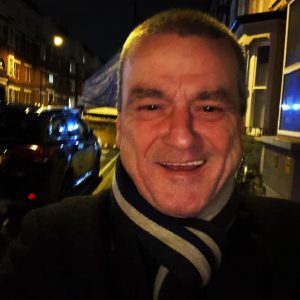 Leslie Richard McKeown (12 November 1955 – 20 April 2021) was a Scottish pop singer. He was the lead singer of the Bay City Rollers during their most successful period in the 1970s.

McKeown was born in Broomhouse, Edinburgh, on 12 November 1955.[1][2] His father, Francis, worked as a tailor and was deaf;[1] his mother, Florence (née Close), was a seamstress[2] who relocated to Scotland after getting married.[1] Both immigrated to the United Kingdom from Ireland.[3][4] The family communicated with his father via hand signals.[1] McKeown was raised in a city tenement block,[5] attended Forrester High School, and volunteered in the Boys’ Brigade.[1] He dropped out of school when he was 15 and became a member of the band Threshold.[6] He was employed at a paper mill in between the group’s gigs, which earned them £20 per show.[2]

McKeown joined the Bay City Rollers in November 1973,[2] replacing founding lead singer Gordon “Nobby” Clark.[4] He was initially reluctant to join the group, later stating in his memoir that it was not “high on my list of bands I’d have wanted to join”.[2] The band was originally founded in the mid-1960s but only achieved popularity after McKeown joined.[7][8] They had four songs in the Top 10 in 1974 (“Remember“, “Summerlove Sensation“, “All of Me Loves All of You”, and “Shang-a-Lang” which featured McKeown as the frontman).[2][8] This was followed by a UK number one (“Give a Little Love“) and a US number one (“Saturday Night“, which was re-recorded with McKeown as the lead vocalist)[8] a year later.[5] It was during this time, McKeown later wrote, that he was raped by their manager, Tam Paton, and that Paton provided him with Mandrax and amphetamines to help him cope with the pressures of touring.[2]

McKeown left the group in 1978, as its popularity began to decline.[5] He established the pop band Egotrip and released a solo album in 1979 titled All Washed Up,[9] which was successful in Japan. He went on to release eight more solo albums.[5] He rejoined Bay City Rollers in 2015 for a series of reunion shows the first of which, at Glasgow’s Barrowlands, sold out in three minutes.[10][11] He released his final album, The Lost Songs, in 2016.[5]

McKeown killed an elderly neighbour in 1975 as a result of reckless driving, for which he was banned from driving for one year and fined £100.[5] He later revealed how the guilt he felt over the event played a key role in his alcoholism.[9] In 2005 he was found to have been driving while drunk, over twice the legal limit, and had left the scene of an accident. He was consequently banned for 18 months and fined £1,000.[5]

McKeown met his wife, Peko Keiko, in 1978.[2] They married five years later,[1] and had one child together: Jubei, also known as Richard. In 2008 McKeown stayed at a treatment facility in California for four months, successfully overcoming his addiction to alcohol.[2] One year later, in the TV show Rehab for Living TV, covering celebrities fighting addiction, he disclosed that he was a “secret bisexual” and admitted being unfaithful to his wife with both men and women.[12][13]