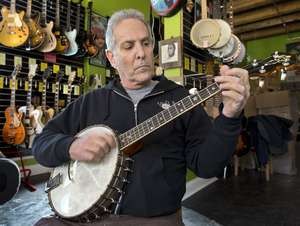 SXSW 2016: Festival co-founder Louis Meyers dies
Louis Meyers, one of the four founders of the South by Southwest Music and Media Conference in 1987, died early Friday of a heart attack at St.
MYSTATESMAN.COM

Louis Meyers, one of the four founders of the South by Southwest Music and Media Conference in 1987, died early Friday of a heart attack at St. David’s South Austin Medical Center. He was 60.

Meyers was the SXSW’s music festival director for its first eight years. He sold his share in the business to partners Roland Swenson, Louis Black and Nick Barbaro after the 1994 conference, just before SXSW added separate film and interactive events. After moving overseas for a few years, Meyers became executive director of the annual Folk Alliance International convention in Memphis and Kansas City from 2005 to 2014. He moved back to Austin last year.

Meyers was admitted to the hospital Thursday and initially was diagnosed with blood clots, said Mike Stewart, a longtime friend and former business partner. Other than mild lethargy in the past couple of weeks, Meyers hadn’t been ill, Stewart said, and was planning to attend Friday’s SXSW keynote by President Barack Obama at the Long Center.

“We all had a shared vision of what the event could be like, but Louis was really the music guy,” Swenson said Friday afternoon. “He had music business connections and a lot of knowledge. Those things were critical in the early days, and he worked tirelessly to get the event off the ground.”

Meyers grew up largely in Austin, where his family has deep roots. After studying music at Claremore Junior College in Oklahoma and broadcast journalism at the University of Arkansas in the 1970s, he spent a few years playing banjo, guitar and steel guitar in regional bands. In the early 1980s, he returned to Austin, rising to prominence in the city’s music community when he and Mark Pratz formed Lunch Money Productions to produce shows at Liberty Lunch, the Continental Club and other local venues.

Meyers later lived in Kansas City, where he was director of Folk Alliance International.

“He really had his finger on the reggae pulse,” Pratz said Friday. Meyers also began managing several local bands, including nationally renowned reggae group Michael E. Johnson & the Killer Bees. For a while, he had an office adjacent to the Austin Chronicle. “He would come over and we would all sit around and shoot the breeze,” Swenson said.

In 1986, Meyers and Swenson were part of an Austin contingent that traveled to the New Music Seminar, a trip that planted the seeds for a New Music Seminar-sponsored convention in Austin the following spring. “When the seminar people backed off of doing an event, he and I were the ones who talked (Chronicle editor and publisher) Louis and Nick into doing the thing,” Swenson said.

From 1987 to 1994, SXSW ballooned from a regional upstart with 172 performers to an international sensation with nearly 500 acts. In Meyers’ final year, Johnny Cash delivered the keynote address and performed a now-legendary set at Emo’s.