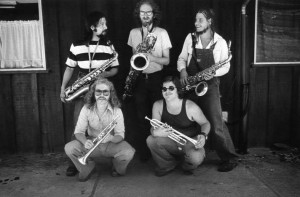 Mic Gillette was an American brass player born May 7, 1951 and raised in northern California‘s East Bay area. He was famous for being a member of Tower of Power, Cold Blood, and The Sons of Champlin. His father Ray Gillette was a trombonist with Harry James, Tommy Dorsey, Stan Kenton, and other big bands. Mic Gillette passed away January 17, 2016 of a heart attack.[1]

A child prodigy, Gillette picked up the trumpet and was reading music by age four. At 15, he joined the Gotham City Crime Fighters (which later evolved into the Tower of Power), playing both trumpet and trombone(as well as baritone and tuba). Gillette took a brief break from Tower of Power to tour and record with the band Cold Blood, but re-joined Tower of Power a year later, hitting the road and opening for Santana andCreedence Clearwater Revival.

As its reputation as a premier horn band grew, Tower of Power toured with Heart, Rod Stewart, and The Rolling Stones, among others. In addition, Gillette has appeared on hundreds of recordings as a session player (in 1984, fearing that his daughter Megan would not recognize him, Gillette quit touring to be a full-time father). In 1998 shortly after joining the Sons of Champlin he missed one of their concerts due to a split lip. According to Mic himself, he had split his lip, due to not playing for 14 years after leaving Tower of Power. He spent those years running a landscaping business in the San Francisco Bay Area.

An outstanding brass player with a great range and a funky style, Gillette played a Marcinkiewicz Rembrandt Model SC3X.351 Large-Bore Trumpet and a King 3B trombone with an F-attachment (he also played a Pan American E-flat Tuba and an Olds 3-valve baritone). He used and endorses Marcinkiewicz mouthpieces on all of this equipment. Oddly, Gillette practiced very little; in a 2002 interview, he claimed to play only 3–4 days a week, and said he hadn’t practiced regularly since he was seven.

Gillette was a member of the Sons of Champlin (he departed in 2006), fronted by Chicago vocalist and keyboardist Bill Champlin; he was also a member of Tortilla Soup, a 10 piece northern California band. He played with comedian Danny Marona, the Stevie “Keys” Roseman All Star Band, the Strokeland Superband, and Funky Loophole (Gillette’s own band).

Married (to Julia), Gillette suffered a heart attack (reportedly, his daughter saved his life) and vowed to get and stay healthy. He toured and recorded with The Doobie Brothers (appearing on the Doobie’s “Live At Wolf Trap” DVD), Blood, Sweat & Tears, and Santana, and released a children’s album “Newvo Kids” (1995) and a solo CD entitled “Ear Candy” (2005) on the BKA Records label. He was also featured on “Hip Li’l Dreams,” a disc of originals released by the Sons of Champlin in 2005.

Gillette worked on various side projects. After a chance meeting with Tony Adamo, Gillette wrote the horn arrangements for Adamo’s album, “Straight Up Deal.” His arrangements can be heard on Adamo tunes “No Strings,” “Up in It,” and “Groove Therapy.”

After a 25-year absence, Mic Gillette rejoined Tower of Power (August 2009) for touring, replacing Mike Bogart; but he left the band again after just more than a year and a half (February 14, 2011).

In the last years of his life, Gillette continued to do session work as well as live appearances; fulfilling a long-time dream to assemble his own band, he brought together Megan Gillette McCarthy, Greg Barker, Dave Hawkes, Clint Day, and Matt Martinez to create MGB, the Mic Gillette Band. But Gillette spent much of his time doing clinics at middle schools & high schools (he was, for example, a guest clinician at Northgate High School in Walnut Creek). He raised hundreds of thousands of dollars for music departments in schools across the United States.