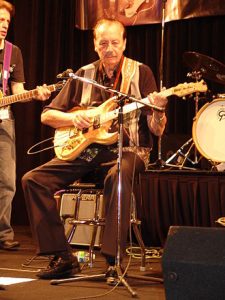 Nole Floyd “Nokie” Edwards (May 9, 1935 – March 12, 2018) was an American musician and member of The Rock and Roll Hall of Fame. He was primarily a guitarist, best known for his work with The Ventures.[1] Edwards was also an actor, who appeared briefly on Deadwood, an American Western drama television series.

Edwards was born in Lahoma, Oklahoma, the son of Elbert and Nannie,[2] a Native American Cherokee.[citation needed] Edwards came from a family of accomplished musicians, so that by age five he began playing a variety of string instruments including the steel guitar, banjo, mandolin, violin, and bass. His family relocated from Oklahoma to Puyallup, Washington.

During Edwards’ late teen years he joined the Army Reserves. After traveling to Texas and California for training, he returned home and began playing regularly for pay in numerous country bands in the area.

In January 1958, country songwriter and guitarist Buck Owens relocated from California to Tacoma, Washington, as owner of radio station KAYE. Prior to the formation of The Buckaroos with Don Rich, Edwards played guitar with Owens in the new band he formed in the area, and also played in the house band of television station KTNT, located in the same building as KAYE. In 1960 Edwards recorded a single, “Night Run” b/w “Scratch”, on Blue Horizon Records with a band called The Marksmen.

The Ventures are an instrumental musical quartet founded in Tacoma, Washington, in 1958. Original members included Don Wilson on rhythm guitar, Bob Bogle on lead guitar (who later became the bass player), and drummer George Babbitt, who went on to become a 4-star general in the U.S. Air Force. When Babbitt left, Howie Johnson took his place, and was later replaced by Mel Taylor. Edwards met Wilson and Bogle when they performed on KTNT. Edwards originally played bass for The Ventures, but he took over the lead guitar position from Bogle.[1] The Ventures released a series of best-selling albums through 1968, at which time Edwards left; he would occasionally reunite with the band, however.

Edwards continued to tour Japan annually with The Ventures, primarily in winter, until 2012.

In 1969 Edwards began a solo career and released several albums through 1972. His solo attempt was unsuccessful in America, and he returned to the Ventures as lead guitarist in 1973. Edwards performed with the band until 1984, when he left again to pursue a music career in Nashville, Tennessee. He played lead guitar for Lefty Frizzell, on what would become Frizzell’s final recording sessions. In the late 1980s Edwards re-joined The Ventures once more for another short stint of recording and touring before returning to Nashville. Throughout the 1990s he was involved with numerous country-influenced recording projects.

Edwards performed occasionally in the United States as both a soloist and member of various bands, including AdVenture, Art Greenhaw, and Texas Western swing outfit The Light Crust Doughboys. The fruitful and critically acclaimed collaboration of Edwards and artist-producer Greenhaw resulted in a number of albums in several music genres including Edwards’ two nominations for “Grammy Award for Best Southern, Country or Bluegrass Gospel Album of the Year”, album titles 20th Century Gospel (2005) and Southern Meets Soul (2006).[3]

In July 2010, Deke Dickerson announced on his Facebook page that he was currently working on a new studio album with Nokie Edwards. Dickerson and his band backed Edwards for several shows, including Deke’s yearly Guitar Geek Festival held in Anaheim, California.

Rock And Roll Hall Of Fame[edit]

In 2008, Edwards was inducted into The Rock and Roll Hall of Fame along with The Ventures. The award was presented by John Fogerty. The band performed their biggest hits, “Walk Don’t Run” and “Hawaii Five-0”, augmented on the latter by Rock and Roll Hall Of Fame musical director Paul Shaffer and his band.

After accepting an offer to pursue an acting career, Edwards landed a role on Deadwood, an American Westerndrama television series. Edwards played the mysterious friend of Wild Bill Hickok and a local citizen, who serves as a bridge between the villains and heroes of the show. During production, Edwards temporarily relocated to Santa Clarita, California and lived on the set’s location with his wife Judy.

Edwards designed and recently sold his own custom guitar, the HitchHiker, a hybrid of the best elements of the Fender Telecaster and Mosrite guitars. The HitchHiker features a sloped-back tilt headstock, a neck-through-body with swamp ash and quilted maple, zero fret, gold control plates, Seymour Duncan Humbuckers with split coils, and an ebony fingerboard. Its bridge works on a slide scale invented by Edwards. The HitchHiker can simulate an acoustic guitar and provides 15 different sound selections. The body design is essentially the original Mosrite body, which Edwards preferred. The hybrid guitars are currently being crafted in New River, Arizona.

Edwards died in Yuma, Arizona following complications from hip surgery, at the age of 82.[4]