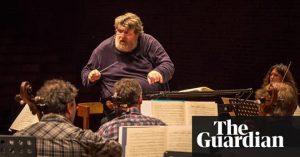 Oliver Knussen was born in Glasgow, Scotland. His father, Stuart Knussen, was principal double bass of the London Symphony Orchestra, and also participated in a number of premieres of Benjamin Britten‘s music.[1] Oliver Knussen studied composition with John Lambert between 1963 and 1969, and also received encouragement from Britten. He spent several summers studying with Gunther Schuller at Tanglewood in Massachusetts and in Boston.[2] He later became the head of contemporary music activities at Tanglewood, between 1986 and 1993.

He was married to Sue Knussen, a US-born producer and director of music programmes for BBC television and for the UK’s Channel 4 – for which she made Leaving Home, an introduction to 20th-century music presented by Simon Rattle in a series of seven one-hour programmes, which won the 1996 BAFTA award for “Best Arts Series”.[3] She ran the Los Angeles Philharmonic‘s education department in the late 1990s. Oliver and Sue Knussen had a daughter, Sonya Knussen, who is a mezzo-soprano. Sue Knussen died of a blood infection in London in 2003. The Sue Knussen Composers Fund (previously, the Sue Knussen Commissioning Fund) “honours her memory and professional legacy…and…commissions works from emerging composers to be performed by contemporary music ensembles worldwide.”[4]

Knussen lived in Snape, Suffolk, Benjamin Britten’s base during one of his most creative periods.[5] Snape Maltingsconcert hall is the home of the Aldeburgh Festival. Knussen died on 8 July 2018, aged 66.[6]

Though Knussen began composing at about the age of six; an ITV programme about his father’s work with the London Symphony Orchestra prompted the commissioning for his first symphony (1966–1967). Aged 15, Knussen stepped in to conduct his symphony’s première at the Royal Festival Hall, London, on 7 April 1968, after István Kertész fell ill. After his debut, Daniel Barenboim asked him to conduct the work’s first two movements in New York a week later.[7] In this work and his Concerto for Orchestra (1968–1970), he had quickly and fluently absorbed the influences of modernist composers Britten and Berg as well as many mid-century (largely American) symphonists, while displaying an unusual flair for pacing and orchestration.[2] It was as early as the Second Symphony (1970–1971), in the words of Julian Anderson, that “Knussen’s compositional personality abruptly appeared, fully formed”.[8]He was awarded CBE in the 1994 Birthday Honours.[9]

In 2005 Knussen was the music director of the Ojai Music Festival.

From September 2006, Knussen was artist-in-association to the Birmingham Contemporary Music Group, and from 2009 to the BBC Symphony Orchestra.

His major works from the 1980s were his two children’s operas, Where the Wild Things Are and Higglety Pigglety Pop!, both libretti by Maurice Sendak – and based on Sendak’s own eponymous children’s books.[10] Where the Wild Things Are received its New York premiere in November 1986 by New York City Opera, which also performed the work in April 2011.

Knussen wrote his Songs for Sue, a setting of four poems for soprano and 15-piece ensemble, as a memorial tribute to his late wife, and the music received its world première in Chicago in 2006. Knussen told Tom Service in The Guardian:[11]

I knew there were a number of Dickinson poems addressed to her sister, Sue, so one week I read all 1,700 poems of Emily Dickinson … and I copied out about 35 of them by hand, I have no idea where the notes for this piece come from … It seemed to want to be written … I wasn’t sure whether it … ought to be let out at all … because I didn’t want it to be a self-indulgent thing. But actually it’s very restrained. It’s not a huge work – about 13 minutes – but it’s a big piece emotionally.

As of autumn 2012, Knussen was writing a symphonic adagio for the Philadelphia Orchestra. He was also planning to finish two concertos that he had worked on for several years: one for piano and one for cello.[12]