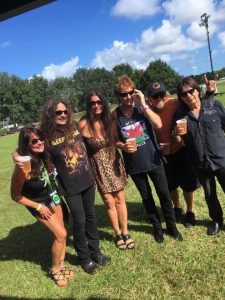 Paul William Chapman (9 June 1954 – 9 June 2020)[1] was a Welsh rock guitarist best known for his work in bands such as UFO and Lone Star. Chapman was well known by his nickname “Tonka”, allegedly acquired because of his indestructible qualities.

Chapman remained in UFO until 1983 and played on another three albums, The Wild, The Willing and the Innocent (1981); Mechanix (1982); and Making Contact. In 1983, after numerous line-up changes UFO decided to call it a day and the tour was promoted as a farewell tour (although they subsequently reformed the following year). UFO released a compilation album later that year incorporating songs featuring various of their members in other bands. Chapman was represented by a Lone Star song. The album was completed by several songs recorded live on the farewell tour.

Chapman released an album, Anthology Volume One, on his own Paul Chapman Enterprises label, which covered his career from Lone Star through to Ghost. A solo instrumental track, “The Bells of Berlin” appeared as part of the December 2000 archive Waysted collection Your Prayers Are Saved.

He played on a Nazareth tribute album released in 2001, Another Hair of the Dog, on two tracks “This Flight Tonight” and “Let Me Be Your Dog”.

Chapman also went on to form a new band PCP (Paul Chapman Project) which has still a mystery album underway, along with a book he has been writing titled “Tonka Tales”.

Chapman gave music lessons from his own studio in Palm Bay, Florida. In May 2006, he announced he was planning to re-record classic UFO songs. He enlisted the help of Robin McAuley who sang on versions of “No Place To Run”, “Wild, Willing & Innocent” and “The Writer” cut at Garudio Studios in Palm Bay.

In 2015, Chapman went out for a 10-week US tour with the Swedish/Canadian band Killer Bee and he also recorded on their album Eye in the Sky.

The new Visual Album "Utopia for Realists" is OUT NOW!

The new Visual Album "Utopia for Realists" is OUT NOW! Epic suite of progressive jazz-rock, fea[...]