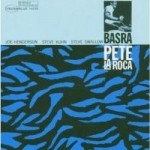 Recent Posts From This Author

Drummer-composer Pete La Roca, best known for his playing in the 1960s with greats such as Sonny Rollins, John Coltrane, Art Farmer and Paul Bley, died Monday. He was 74 and he lost his battle with lung cancer.

La Roca, who was born Peter Sims but took the name La Roca after playing timbales in Latin bands, also distinguished himself by leaving music in the late 1960s to become a lawyer. He returned to jazz in the late 1970s.

Saxophonist David Liebman was moved to respond immediately last night to La Roca’s passing, since he had come up under the drummer’s wing. Liebman wrote on Facebook:

MASTER-APPRENTICE: Before the advent of so many jazz programs in America, the question used to be to a young musician: ”Who did you play with?” The inference was what “master” did you serve under. (Now the question is: ”What school did you attend?”)

Those of you familiar with my background know that I most notably put in a few years with Elvin Jones and Miles Davis (and Chick Corea much later).

But my first true employer was drummer Pete LaRoca Sims. (The name LaRoca, meaning the Rock, came from his reputation, but his real name was Sims.)I have written in my biography about my audition with Pete, Steve Swallow and Chick in 1969 playing a few bars of “Softly” before Pete stopped the music and said: ”Let’s rehearse.” I spent the next six months with him mostly doing a gig at a club on 69th Street and Broadway called La Boheme paying five dollars a night-(absolutely true).We ended that cycle playing the Village Vanguard on Thanksgiving weekend in 1969, forty three years ago…my first time there.I was substitute teaching in NY schools at the time to make a living residing in my first of many lofts on West 19th Street in Manhattan trying to learn the music. For those six months every bass player and pianist in New York worked with Pete and me.He was my first teacher in all ways. He was a brilliant guy who after being so disenchanted with the music business became a lawyer. Over the next decades, every once in awhile he would put together a group to work a few weekends in NY, but basically Pete went into sunset mode.He was by far one of the most brilliant minds I ever knew, one of the greatest musicians I ever encountered who for starters would sing the bass line IN KEY and was a drummer like no one else.

Coltrane had him before Elvin; he worked with Newk; Miles wanted him to join as did Herbie Hancock when he branched out on his own.

Pete was one of a kind … a stubborn, brilliant guy who insisted on perfection. I will never forget the lessons he taught me, which I recite almost daily in my teaching. For me, Pete’s passing is in a sense like the passing of a father or uncle, meaning of all my mentors he was the last to survive.

– Lieb on the road