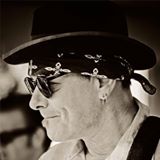 St. Louis, MO – Preston Hubbard, who played bass with the Fabulous Thunderbirds, and Room Full of Blues was found dead at home earlier today; he was 63 years young.

Hubbard was well known in the music community, as much for his struggles with drugs and alcohol as for his stellar bass lines. Born and raised by his mother in Providence, Rhode Island, Hubbard began playing bass at 14. He left home at 17 and continued to learn the bass. Eventually, Hubbard had an opportunity to join the Room Full of Blues. After a time, the band wound up becoming the first backup band for the Blues Brothers, including their first live gigs at The Bottom Line in New York City.

Hubbard first heard about The Fabulous Thunderbirdsfrom Muddy Waters himself, and eventually met the band in Boston. he would turn down a spot in Stevie ray Vaughan’s Double Trouble, and instead tour with The Alley Cats, who broke up when their guitar player, Tinsley Ellis, left for law school. After some gigging,  Hubbard again wound up playing with Room Full of Blues. In 1985, Hubbard got the call he had been waiting for from Jimmie Vaughan and The Fabulous Thunderbirds. He would play with the group until he left in 1995.

After leaving the T-Birds, Hubbard descended into  a world of drugs, dealing, arrests, and finally jail. Upon release, Hubbard was clean for the first time in 18 years.

In 2014, Hubbard was admitted to Barnes-Jewish Hospital, St. Louis near death. While he was still clean, his body was completely ravaged by the effects of almost 20 years of hard living and hard drugging. According to reports he was stabilized only after 30 hours that included three blood transfusions, and insulin treatments.

Since then, Hubbard has been living, keeping clean and straight, and playing with artists that traveled through St. Louis. He will be remembered for far more than just his time with The Fabulous Thunderbirds, and Room Full of Blues. He lent his incredible bass lines to a multitude of artist’s including Bonnie Raitt’s, The Vaughan Brothers, Duke Robillard, Etta James, Professor Longhair, Albert King, Albert Collins, Nick Curran, The Blues Brothers, and played with Tinsley Ellis in the Alley Cats. Hubbard will live on through the amazing legacy he left us in his music.