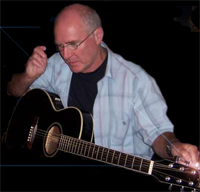 Raymond John Fenwick (born 18 July 1946) is an English guitarist and session musician, best known for his work in The Syndicats and in The Spencer Davis Group in the 1960s, and as the lead guitarist of Ian Gillan‘s post-Deep Purple solo project, the Ian Gillan Band.

Fenwick’s first professional group was a ska and bluebeat group called Ray and the Red Devils. In 1964, he joined The Syndicats, replacing Steve Howe, and in turn being replaced by Peter Banks. In 1965, he joined the Dutch group Tee-Set, from which developed another group After Tea.

He was with The Spencer Davis Group from 1967 to 1969. He also co-wrote the theme music to the 1970s television series Magpie, which was credited to “The Murgatroyd Band”, which was basically The Spencer Davis Group at the time. Fenwick wrote all songs on the group’s 1969 album Funky (briefly released in the US in 1970; full release only in 1997) and recorded his own album Keep America Beautiful, Get a Haircut in 1971 with a similar line-up, albeit minus Davis.

In July 1972, he played guitar on a number of the tracks for Bo Diddley‘s Chess Records album The London Bo Diddley Sessions. During the 1970s, he was part of the Ian Gillan Band. He participated in Jon Lord‘s live album Windows (1974). He was also in the group Fancy, who had the hits “Touch Me” and a cover of Chip Taylor‘s “Wild Thing“.

He returned to sessions and then featured on former Rainbow vocalist Graham Bonnet‘s album Here Comes the Night (1991).

In 2003, Fenwick toured with Yes guitarist Steve Howe as part of his band Steve Howe’s Remedy, appearing on the live concert DVD of Steve Howe’s Remedy Live released in 2005. He appears on Steve Howe’s compilation Anthology 2: Groups and Collaborations, released 2016. The two guitarists play together on the track “Slim Pickings”, recorded 2002, which closes the album.

Fenwick taught guitar and jazz grades at various colleges and schools in Britain, including Boston College, Lincolnshire and continues to teach to this day.