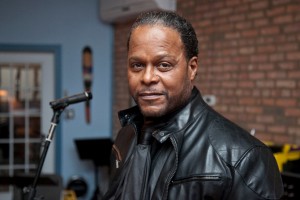 Chicago soul singer Reginald Torian Sr. has died at the age of 65. He reportedly suffered a heart attack Wednesday while rehearsing for an upcoming show. Torian…

Chicago soul great Reggie Torian dies; falsetto heir to Mayfield
Silky-voiced Chicago soul singer Reggie Torian, who stepped in to sing with The Impressions after the departure of Curtis Mayfield, has died.
CHICAGO.SUNTIMES.COM

The Impressions are an American music group from Chattanooga and Chicago, originally formed in 1958. Their repertoire includes doo-wop, gospel, soul, and R&B.[1]

The group was founded as The Roosters by Chattanooga, Tennessee natives Sam Gooden, Richard Brooks and Arthur Brooks, who moved to Chicago and added Jerry Butler and Curtis Mayfield to their line-up to become Jerry Butler & the Impressions. By 1962, Butler and the Brookses had departed, and after switching to ABC-Paramount Records, Mayfield, Gooden, and new Impression Fred Cash collectively became a top-selling soul act. Mayfield left the group for a solo career in 1970; Leroy Hutson, Ralph Johnson, Reggie Torian, Sammy Fender and Nate Evans were among the replacements who joined Gooden and Cash. Inductees into both the Rock and Roll Hall of Fame and the Vocal Group Hall of Fame, The Impressions are best known for their 1960s string of hits, many of which were heavily influenced by gospel music and served as inspirational anthems for the Civil Rights Movement. They are also 1998 Grammy Hall of Fame inductees for their hit “People Get Ready“, and are winners of the Rhythm and Blues Foundation’s Pioneer Award (in 2000) .

Jerry Butler and Curtis Mayfield met while singing in the same Chicago church choir. After singing in a number of local gospel groups, the two of them joined a doo-wop group called “The Roosters” in 1957, whose members included Chattanooga, Tennessee natives Sam Gooden, Richard Brooks, and his brother Arthur Brooks. By 1958, The Roosters had a new manager in Eddie Thomas, a record deal with Vee-Jay Records, and a new name: “Jerry Butler & the Impressions”.

The group’s first hit single was 1958’s “For Your Precious Love“, which hit #11 on the US pop charts and #3 on the R&B charts. However, soon after the release of the R&B Top 30 hit “Come Back My Love”, Butler left the group to go on to a successful solo career. After briefly touring with the now-solo Butler as his guitarist, Curtis Mayfield became the group’s new lead singer and songwriter, and Fred Cash, a returning original Roosters member, was appointed as the new fifth member.

Mayfield wrote a number of Butler’s early solo hits, and used the money to get The Impressions to move to Chicago, Illinois. There, they got a new deal with ABC-Paramount Records in 1961, and released their first post-Butler single. That single, “Gypsy Woman“, was their biggest single to date, hitting #2 on the R&B charts and #20 on the pop chart. Successive singles failed to match “Gypsy Woman”′s success, and Richard and Arthur Brooks ended up leaving the group in 1962.

The Impressions returned to Chicago as a trio, and soon aligned themselves with producer Johnny Pate, who helped to update their sound and create a more lush soul sound for the group. The result was “It’s All Right“, a 1963 million-selling gold single that topped the R&B charts and made it to #4 on the pop charts, and became one of the group’s signature songs. “It’s All Right” and “Gypsy Woman” were the anchors of The Impressions’ first LP, 1963’s The Impressions.

1964 brought the first of Mayfield’s Black pride anthem compositions, “Keep on Pushing“, which became a Top 10 smash on both the Billboard Pop and R&B charts, peaking at #10 Pop. It was the title cut from thealbum of the same name, which also reached the Top 10 on both charts. Future Mayfield compositions would feature an increasingly social and political awareness, including the following year’s major hit and the group’s best-known song, the gospel-influenced “People Get Ready“, which hit #3 on the R&B charts and #14 on the pop charts.

In the mid-1960s, The Impressions were compared with Motown acts such as The Temptations, The Miracles, and The Four Tops. After 1965’s “Woman’s Got Soul”, and the #7 pop hit “Amen”, The Impressions failed to reach the R&B Top Ten for three more years, finally scoring in 1968 with the #9 “I Loved and Lost”. “We’re a Winner“, which hit #1 on the R&B charts that same year, represented a new level of social awareness in Mayfield’s music. Mayfield created his own label, Curtom, and moved The Impressions to the label. Over the next two years, more Impressions message tracks, including the #1 R&B hit “Choice of Colors” (1969) and the #3 “Check Out Your Mind” (1970), became big hits for the group.

The Impressions were a notable influence on Bob Marley and The Wailers and other ska/rocksteady groups and singers in Jamaica: The Wailers modelled their singing/harmony style on them and in part borrowed their look, too. There are many covers of Impressions songs by The Wailers, including “Keep On Moving”, “Long Long Winter” and “Just Another Dance”. Pat Kelly covered “Soulful Love”, The Heptones covered “I’ve Been Trying.” No doubt the social consciousness of Curtis Mayfield’s lyrics appealed as well as the spectacular harmonies.

After the release of the Check Out Your Mind LP in 1970, Mayfield left the group and began a successful solo career, the highlight of which was writing and producing the Super Fly soundtrack. After his success with this soundtrack, he collaborated on the soundtracks of Claudine, Sparkle, and A Piece of the Action. He continued to write and produce for The Impressions, who remained on Curtom. Leroy Hutson was the first new lead singer for the group following Mayfield’s departure, but success eluded The Impressions, and Hutson left the group in 1973. Jon French was the drummer for the touring band playing around the United States and Europe. He is also heard on the recording of “Freddie’s Dead”

New members Ralph Johnson and Reggie Torian replaced Hutson, and The Impressions had three R&B Top 5 singles in 1974–1975: the #1 “Finally Got Myself Together (I’m a Changed Man)” (which also reached the Pop top 20 ), and the #3 singles “Same Thing it Took” and “Sooner or Later”. In 1976, The Impressions left Curtom and Mayfield behind for Cotillion Records, and had their final major hit with “Loving Power”. The same year, Ralph Johnson was replaced by Nate Evans, who remained in the group for three years, during which time The Impressions switched to 20th Century Records. Singles and albums sales continued to slip, and Evans left in 1979, reducing the group to a trio. The album Fan the Flames was released in 1981.

Reggie Torian left in 1983. Ralph Johnson rejoined that year, as well as new member Vandy Hampton.[2][3] This lineup recorded with Eric Clapton on his Reptile album.

Johnson left in 2001, was replaced by Willie Kitchens.[4] This lineup was featured on the PBS specials R&B 40 and Soul and Inspiration. Hampton was released in 2003; he died in 2005.[3] Reggie Torian later returned, replacing Kitchens. The Impressions recorded a tribute album to Curtis Mayfield in 2000, which was released by Edel America. In 2008, Universal Music & Hip O Records released Movin’ On Up – the first-ever video compilation of The Impressions, featuring brand-new interviews with original Impressions members Sam Gooden and Fred Cash, along with taped interviews with the late Curtis Mayfield and video performances of the group’s greatest hits and several of Mayfield’s solo hits. The group’s first million-selling hit song “For Your Precious Love”, featuring original lead singer Jerry Butler on lead, is ranked #327 on theRolling Stone magazine’s list of Rolling Stone’s 500 Greatest Songs of All Time, and their hit “People Get Ready” is ranked #24 on that same list. Also, The Impressions’ album/CD The Anthology 1961–1977 is ranked at #179 on Rolling Stone magazine’s list of The 500 Greatest Albums of All Time.

Their 1965 hit song “People Get Ready” has also been chosen as one of the Top 10 Best Songs Of All Time by a panel of 20 top industry songwriters and producers, including Paul McCartney, Brian Wilson, Hal David, and others, as reported to Britain’s Mojo music magazine.

In July 2013, The Impressions released “Rhythm!,” their first single in over thirty years, on Daptone Records. The 7″ record featured original members Fred Cash, Sam Gooden, and Reggie Torrian and was produced by Binky Griptite, guitarist for The Dap Kings. “Rhythm!” was originally penned by Curtis Mayfield in the mid-sixties. The B-Side, “Star Bright,” was written by Binky Griptite.[5]

In August 2013, former Impressions member Leroy Hutson filed a complaint against Young Jeezy and others alleging that Young Jeezy’s song “Time” inappropriately incorporated the instrumental portion of The Impressions “Getting it On,” which was registered with the United States Copyright Office in 1973.[6]

For a detailed listing of the various versions of the group, see Impressions chronology.