“Love You Madly: Live at Bubba’s” from 1982 with Paul Berner, Duffy Jackson and Robert Thomas Jr. Each release comes with an elaborate insert replete with rare photos; newly-commissioned essays and interviews; and pressed at

(RTI) with mastering by

(Bill Evans and Monty Alexander) or Kevin Gray at

“Rollins in Holland” is the first archival release from the Saxophone Colossus himself,

. Released in partnership with the

, this deluxe 2CD and limited-edition 180g 3LP set is officially sanctioned by Rollins and is comprised of 3 different previously unissued performances with bassist Ruud Jacobs and drummer Han Bennink in May of 1967 at VARA Studio 5 in Hilversum, the Arnhem Academy of Visual Arts in Arnhem, and a televised performance at the Go-Go Club in Loosdrecht. Rollins in Holland will include an extensive booklet with never-before-published photos from each venue; essays by Aidan Levy (currently writing a biography of Sonny Rollins for Da Capo Press) and Dutch jazz journalist/producer Frank Jochemsen; plus interviews with Sonny Rollins, Han Bennink, a remembrance of Ruud Jacobs, and more. LP mastered and cut at 33 1/3 RPM by Kevin Gray at Cohearent Audio, and pressed at Record Technology Inc. (RTI).

“Live at Ronnie Scott’s” is the third official Resonance release of previously unissued recordings of the Bill Evans trio with Eddie Gomez and Jack DeJohnette, and the fifth release with the Evans Estate. The recordings that comprise this release come from the personal archives of drummer Jack DeJohnette, who has had them in storage for over 50 years, and the nearly 2 hours of music has been remastered from the original tape reels. “Live at Ronnie Scott’s” was captured in July of 1968, just after their legendary performance at the Montreux Jazz Festival and Resonance’s long-lost studio session “Some Other Time” from the Black Forest. Gracing the cover on the limited-edition (of 7,000) 180 gram 2LP sets is a never-before-published lithograph drawing by the legendary artist and illustrator David Stone Martin. Includes an extensive booklet with rare photos from Chuck Stewart, Jan Persson and others; essays by acclaimed British author Brian Priestly and producer Zev Feldman; a conversation with Chick Corea and Jack DeJohnette; an interview with Eddie Gomez and more! LP mastered and cut at 33 1/3 RPM by Bernie Grundman, and pressed by RTI.

We’d like to thank everyone at Record Store Day and Resonance Records fans around the world for your continued support in making these projects a reality. Stay tuned to this page for more exciting future announcements. 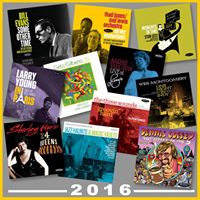 PRE-ORDER NOW on iTunes and receive 2 tracks instantly “Fuzz” & “By The Time I Get to Phoenix”: http://apple.co/2gGwVaK (*includes extensive digital booklet)

For more information, and to read the full press release, go to our website:http://bit.ly/2fza3bR