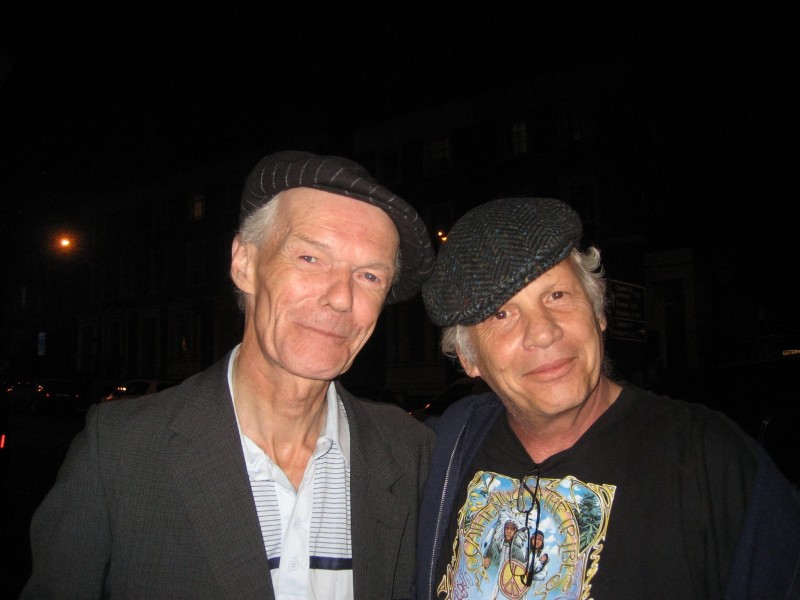 Help Yourself, known to their fans as “The Helps”,[1] were an English rock band of the early 1970s whose style developed from “American-flavoured country-rock … to acid-drenched psych.”.[2]

Help Yourself formed in London in 1970, originally as a backing band for singer-songwriter Malcolm Morley, who had left Sam Apple Pie and been signed as a solo act by Famepushers.[1] The band was assembled by John Eichler who, as well as working for Famepushers, was production manager at Strand Cosmetics, where he hired people either for ‘musical ability’ or ‘strangeness’.[2]

The album was recorded before the band had played a gig, having been signed to Liberty Records by Andrew Lauder, head of A&R. The band toured on theDownhome Rhythm Kings package with Brinsley Schwarz & Ernie Graham (ex Eire Apparent), who were all managed by Famepushers.[2] After the tour, Ken Whaley was fired, but no other bass player was recruited.

Help Yourself, Ernie Graham and his guitarist Jonathan “Jojo” Glemser, moved into Headley Grange in 1971, shortly after Led Zeppelin IV had been recorded there.[1]The line up was amalgamated to include both Graham (who had just released his eponymous solo album backed by Help Yourself and Brinsley Schwarz) and Glemser, both of whom were guitarists, so Treece switched to bass. The band played the 1971 Glastonbury Festival [3] Sam Apple Pie having played the first Glastonbury in 1970. “Street Songs” a track that would later appear on the second album Strange Affair, was issued on a United Artists double album sampler All Good Clean Fun. A tour was arranged to promote this album, so Help Yourself joined Man and Leicester band Gypsy, on a tour of Switzerland.[4] The second album Strange Affair was recorded at the Grange, initially with Richard Treece still on bass, and adding his guitar parts later, until Paul Burton, their then Road Manager and former Sam Apple Pie roadie, joined on bass, to complete the album.[5] Strange Affair was released in early 1972, by which time both Graham and Glemser had left.

The new line up of Burton, Morley, Treece and Charles appeared on their first Peel Session in April 1972 [6] and recorded the next album Beware of the Shadow almost immediately. Sean Tyla, who had been the band’s roadie, helped with some of the songwriting, notably “All Electric Fur Trapper”, which was based on a fairy tale he had written. Shortly after completing the album, the band left Headley Grange, Tyla moved in with ex member Ken Whaley, and they formed Ducks Deluxe.

Just as the Helps were due to start a tour to promote Beware of The Shadow, Morley suffered a bout of depression, (“The Shadow” referred to in the album title).[7]Rather than cancel the tour, Deke Leonard, who had just been fired by Man, stood in. Leonard stayed with the band after Morley had recovered, whilst Help Yourself backed Leonard on his first solo album Iceberg [4]

In December 1972, Help Yourself with Leonard and B. J. Cole, played at Man’s Christmas Party. The double 10″ album, Christmas at the Patti recorded at this concert, contains far more of their performance (24’) than their hosts (11’30’’). Ducks Deluxe also played this concert, but Whaley had already left.

Beware of the Shadow was released in late 1972, but none of the first three albums sold well. The Helps appealed to a hippie audience such as fans of Grateful Deadand Quicksilver Messenger Service so they were moderately successful in the U.S.[1] but never toured there.

In 1973, the band proposed touring with Roger Ruskin Spear, the Flying Aces and Vivian “Spiv” Morris, in a vaudeville show called “Happy Days”, which was to be held in a circus tent. They started recording material for this in January, but Burton was unhappy with the proposed theatrical tour, so he left. Whaley returned and the band started recording their new album in February, finishing the Happy Days album in March and the Helps album in April,[7] when they also recorded their second Peel Session.[6] After a two month “Happy Days” tour, the fourth album, The Return of Ken Whaley, was released, with the Happy Days album included free with the first 5,000 copies.

The fourth album did not sell well either, and the band were not getting many gigs, so they were surprised when United Artists asked them to record another album, which they started recording in July 1973, with a line-up augmented by Sean Tyla. The album was to be called 5 and a cover was commissioned from Rick Griffin. They only had “half formed ideas” and although they eventually laid down 8 tracks, they gave up recording and disbanded in August 1973.[8] They reformed for “The AmazingZigZag Concert” on 28 April 1974 with a core line up of Morley, Treece, Whaley and Charles with Burton and Leonard guesting.

Being incomplete, 5 was not issued, although a few years later some fans tried, unsuccessfully, to persuade the band to complete the album. After Morley released his solo album Aliens in 2001, the suggestion re-arose, and the album was finally completed in 2002/2003 by Morley, Treece and Whaley, with Kevin Spacey on drums, as Charles had other commitments. The album was eventually released in 2004.[8]

Briefly joined Bees Make Honey, before joining Man with Leonard and Whaley, where he co-wrote and recorded Man’s most successful album Rhinos, Winos and Lunatics but left after a US tour. In 1976 Morley recorded a solo album, backed by Plummet Airlines who he’d been working with, and produced by ex Brinsley Ian Gomm. The album was not issued, and the master tapes were lost for 25 years. When the tapes were found, the album was finally issued as Lost and Found in 2002 (Hux 034).[9]

He performed with Deke Leonard, Wreckless Eric and Kirsty MacColl, including a TV appearance with McColl in 1981. He then left the music business.[10] In 2001 he recorded another solo album Aliens which was issued on Creo Records, and in 2008 he started appearing live again.

Briefly joined Deke Leonard’s Iceberg and later re-joined George and Martin Ace in The Flying Aces. Briefly joined The Splendid Humans; before joining former Man members Phil Ryan and Will Youatt in The Neutrons.[2] In 2000, he issued a solo album Dream Arena East (Treece 1) and then joined Ken Whaley in ‘The Archers’, which evolved into his current band ‘The Green Ray’.

The Green Ray comprises Richard Treece (guitar and vocals), Ken Whaley (bass and Vocals), his brother Simon Whaley (drums) and Simon Haspeck (guitar and vocals). They have issued three albums: Soft Cloud (2002) SC001/FYPC15, Back from the Edge (2006) Gray 11 with Aaron Liddard, and the live Classic Rock Club, Cheshunt, 5 January 2008 with Nick Saloman of The Bevis Frond (Effigy 2008), and a DVD with Barry “The Fish” Melton guesting.[11] They played at the Glastonbury Festival (Green Stage) in 2007. Treece died on 26 May 2015.

Charles was an Engineer whilst he was in Help Yourself, (recording the infamous Brinsley Schwarz “hype” concerts at the Filmore East) and subsequently became the resident engineer and producer at Rockfield Studios where he produced and/or engineered albums by Hawkwind, Dr. Feelgood, The Charlatans, The La’s, The Fabulous Thunderbirds and others. He still plays drums, and has played for Dave Edmunds as well as Carl Perkins, George Harrison, Dion DiMucci, Steve Cropper,Jeff Beck and Kid Creole and the Coconuts.[2]

Briefly joined Deke Leonard’s Iceberg, until joining Man with Leonard and Morley. Recorded Man’s two most successful albums Rhinos, Winos and Lunatics and Slow Motion and also left after a US tour. Worked for John Eichler at The Three Kings. Played with Richard Treece in ‘The Archers’ and later in ‘The Green Ray’ (see above) before his death in 2013.

Joined Deke Leonard’s Iceberg after playing on the first album. Toured Republic of Ireland with them. Left after that tour and worked for Manticore Records (Emerson, Lake & Palmer), running their rehearsal studio in Fulham Broadway. Worked as a tour manager for Baker Gurvitz Army (Ginger Baker, Paul and Adrian Gurvitz) until January 1975. Having been newly married took a job as a chauffeur and ended up running a UK subsidiary of a Swiss electronics company as Managing Director for more than 25 years. Retired in 2007 and now living in Devon with his second wife.

After Ducks Deluxe, he formed the Tyla Gang, which made three albums and which both Treece and Whaley played with at various times. In 1981 he worked with Joan Jett and then formed The Force, with Deke Leonard, who recorded one album, Forces First, but Tyla left after suddenly suffering stage fright. He has recently reformed Ducks Deluxe.[12]

Formed pub rock group Clancy in 1971, which recorded two albums before they split in 1976. Gave up being a professional musician. Worked on the railways, including as a guard on The Orient Express, and was training to become a counsellor when he died in April 2001.[3]