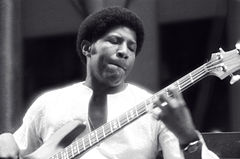 Melbourne Robert “Bob” Cranshaw[1] (December 10, 1932 – November 2, 2016) was an American jazz bassist. His career spanned the heyday of Blue Note Records to his recent involvement with the Musicians Union. He is perhaps best known for his long association with Sonny Rollins. Cranshaw performed in Rollins’s working band on and off for over five decades, starting with a live appearance at the 1959 Playboy jazz festival in Chicago and on record with the 1962 album The Bridge.[2]

Some of Cranshaw’s best-known performances include Lee Morgan‘s The Sidewinder and Grant Green‘s Idle Moments. Cranshaw also served as the sole session bassist to Sesame Street and The Electric Company songwriter and composer Joe Raposo, and played bass guitar on all songs, tracks, buttons and cues recorded by the Children’s Television Workshop during Raposo’s tenure. In addition, he was the bass player for Saturday Night Live from 1975 to 1980 and musical director and bassist for Dick Cavett’s talk show in the early 1980s. He performed in pit orchestras for numerous Broadway shows including Jesus Christ Superstar, Lena Horne: The Lady and Her Music Sergeant Pepper’s Lonely Heart’s Club Band: The Musical and many more. He recorded innumerable recording dates for television shows, films and jingles. He is among the most recorded bassists in history.

Along with Wes Montgomery’s brother Monk, Cranshaw was among the early jazz bassists to trade his upright bass for an electric bass. He was criticized for this by jazz purists, although he was forced to switch by a back injury incurred in a serious auto accident.

Throughout his long career he also performed on hundreds of television shows and film and television scores. He appears in The Blue Note Story, a 90-minute documentary of the jazz label.

Since the 1990s he worked for the musicians union in New York City as an advocate for the rights of jazz musicians. He fought for better pension plans for jazz musicians, to make sure they or their widows received the royalties owed them and for other related issues. Because of his work in television, film and on Broadway, Cranshaw was compensated financially in a way that many jazz musicians were not. He credited his involvement in the union as his way of trying to insure that his fellow jazz musicians receive the same treatment and financial compensation that he did because of his work in other genres and in other media.

Cranshaw died at the age of 83 on November 2, 2016 in Manhattan, New York from Stage IV cancer.[3] He never recorded as a leader.

With Clark Terry and Bob Brookmeyer

With The Young Lions